Leader
Leonardo is one of the four main protagonists of the 1990's LIve-Action Teenage Mutant Ninja Turtles film series and the main protagonist of TMNT. He is the leader of his brothers who wears a blue banda and wields two Katana blades.

Leonardo was voiced by Brian Tochi.

Leonardo was once a regular baby turtle until along with his three turtles brothers were accidently lost in the sewers, where they got cover in a glowing ooze from a scattered canister made by TCRI. The baby turtles were later, by a rat named Splinter, who gattered them up in a coffee can. The next morning both him and his brothers, and Splinter became affected by the ooze, as they all doubled in size. Leonardo and his brothers started to become intelligent, even began to develop the ability of speech. Leonardo and his brothers were then raised by Splinter as his sons, Splinter then chose names for each of them, a finding battered on the Renaissance artists in the storm drain of the sewer, he named Leonardo da Vinci, and taught them the art of Ninjutsu, which he learned from mimicking his owner Hamato Yoshi, and they given weapons for becoming, Leonardo was given two Katanas. 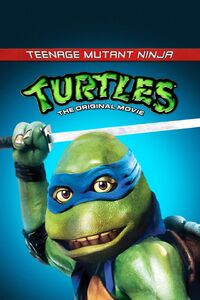