Assist his team with their missions

Before joining the mafia, Abbacchio worked as a policeman who was particularly cynical with his job due to it being unappreciated despite the risk it possessed. One day while on patrol, he came across a criminal who offered him a bribe. Abbacchio reasoned with himself and accepted the bribe, letting the criminal walk free. Some time later, he and his partner were called to a robbery and the two split up. Abbacchio was able to find the criminal and to his surprise, it was the same one who bribed him previously. While the criminal was convincing Abbacchio to look the other way while slowly taking out a gun, Abbacchio's partner busted in and shot the criminal before being shot. Abbacchio was later discharged for taking a bribe while also being haunted for he had done.

Some time later, he was found by Bucciarati and was offered a chance at joining the mafia. Abbacchio finished initiation, gained a stand, and joined the mafia, specializing in particularly difficult and important missions in order to forget about what he's done.

Abbacchio's first appearance in the part involved him eating a slice of cheesecake in order to silence Mista who was ranting about it being served in 4 slices. Abbacchio was silent during Giorno's introduction before deciding to urinate in a tea kettle and giving it to the new member. He was momentarily stunned to see Giorno drink the urine but was unamused about it regardless. After Giorno succeeded his initiation, the team decided to go and find Polpo's treasure due to the owner's death. On their way, Abbacchio's teammates were incapacitated one by one, leaving him, Bucciarati, and Giorno on the ship. Abbachio was adamant about not showing his stand to Giorno, forcing the latter to sacrifice himself to give his teammates some clues.

Abbacchio later used his stand, Moody Blues to track down the rest of the team until it ended up in a place where he could not call it back. Because of this, Abbacchio is attacked by the enemy stand user but he was able to leave enough clues for Bucciarati to discover the enemy stand user which is a man named Mario Zucchero. Abbachio joins the group in kicking the man's body. After the team retrieved the treasure, they were tasked in guarding their boss' daughter, a teenage girl named Trish Una.

Some time after that, Abbacchio, Giorno, and Fugo are tasked with collecting a key. They were later attacked by an assassin named Illuso and his stand, Man in The Mirror who drags Fugo into a mirror. Abbacchio explains the danger of Fugo's stand, Purple Haze before leaving Giorno so that he could get the key, only to be attacked by Illuso as well. Abbacchio was able to outsmart his opponent by disguising his stand as himself, fooling Man in The Mirror into dragging Moody Blues in. Illuso was beaten by Abbacchio's stand before finally dragging half of the latter's body in while also sending half of his stand out. He was however able to send his hand away which was carrying the key. Giorno uses this opportunity to bait Illuso into dragging him into a mirror, allowing the former to infect his opponent with Purple Haze's virus, eventually resulting in the enemy stand user's death in the hands of Fugo's stand. Abbacchio later has his hand sewn back to his arm.

A few days into the task, Narrancia was attacked and their location was compromised, forcing the team to board a locomotive. While in the train, the team were soon under the effects of an enemy stand. Luckily, Mista and Bucciarati were able to take them out, allowing the team to escape. After Bucciarati's fight against Diavolo, Abbacchio was given a choice to join the former in a quest to kill the latter. Abbacchio is among the majority who agree and join. The team later arrive at a restaurant where they accidentally mistaken a civilian for an assassin. Narrancia was subsequently tricked into telling Mista that it was safe to shoot, in a kitchen filled with flammable gas. This results in the team being injured except Narrancia. The team eventually went to an airport where they are followed by a suspicious man who Mista kills with ease. Abbacchio later uses his stand to replay the pilot's movements, allowing the team to use the plane as means of transport.

After the defeat of the enemy stand, they land in an island where Abbacchio is tasked with uncovering Diavolo's identity. While waiting for Moody Blues to finish up, Abbacchio was attacked by Diavolo, a hole being punched through his chest. Abbacchio received several visions of his past before he finally died, leaving behind one final clue for his teammates to find.

Abbacchio is a tall man of slim build. On his head is a serrated headpiece that acts as a headband. He keeps long, light hair, dividing into spikes that angle outwards or upwards at their ends, being shoulder-length in his first appearance and growing longer until halfway down his torso. He also wears a dark shade of lipstick.

He wears a long, dark, lapel-less overcoat with laces that cross his bare chest, dark bell-bottomed pants, and black shoes. The buckle of his belt bears a silver/gold insignia of the letter "A".

When he was younger, during his service as a police officer, his hair was trimmed short in a crew cut hairstyle, and he was not shown in anything other than a standard Italian police uniform.

Leone Abbacchio is a somber, quite bitter yet dedicated member of Bucciarati's team.

As a police officer, Abbacchio wanted to keep the streets safe and vowed to give his life in the pursuit of justice. When contradictions of his job begin to present themselves, he accepts a bribe of a young man while still telling himself that he was only doing the right thing in the end. His personality and outlook change drastically after his partner's death and fall into Passione.

Abbacchio is stern and distrusting, believing that trust must be earned. Out of the group, he is the most no-nonsense, taking objectives seriously and allowing very little to entertain him. Among the few times he smiles is out of spite for others. However, he still frequently participates in a handful of casual group conversations, especially during lunch. On multiple occasions, Abbacchio would indulge in Mista and Narancia's conversations despite the two's random subject matter, inserting logical responses in-between their tangential nonsense.

Moody Blues is a humanoid Stand of a height and build similar to Abbacchio's. It is clothed from its head to its knees in a semitransparent piece of medium shade, open between the base of its neck and its crotch (revealing a light surface), and which forms a tent between its head and its shoulders. 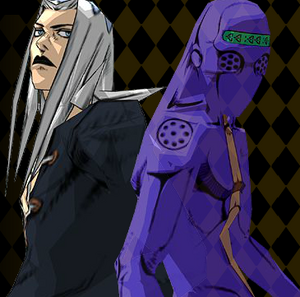 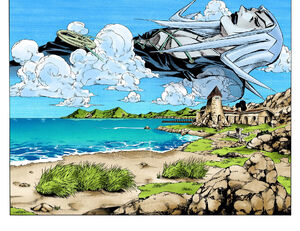