Protect the people of Uruk from Gorgon (posthumously succeeded).

In life, Leonidas I was the legendary warrior king of Sparta who died facing the Persian army in the epic Battle of Thermopylae. Upon his demise, he was deemed worthy of becoming a Heroic Spirit, meaning a mage at any point in history could summon him as a servant to do their bidding. At one point, Leonidas was summoned by the King of Heroes Gilgamesh to participate in the defense of Uruk from the forces of Gorgon. The King of Sparta fought valiantly, although he was once again slain in battle after a final battle with Gorgon.

In all media, Leonidas is voiced by Shin'ichirō Miki in Japanese and by Ray Chase in English dubbing. Chase has also voiced Noctis Lucis Caelum in Final Fantasy XV and Tengen Uzui in Demon Slayer: Kimetsu no Yaiba. 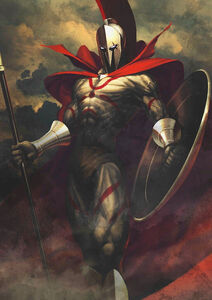 Leonidas stage one in Fate/Grand Order, illustrated by Shimaudon. 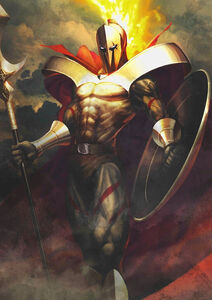 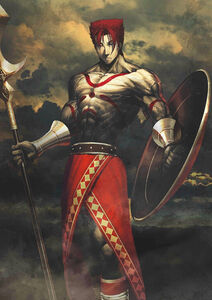 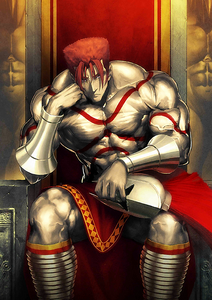 Leonidas stage four in Fate/Grand Order, illustrated by Shimaudon.
Add a photo to this gallery

Retrieved from "https://hero.fandom.com/wiki/Leonidas_(Fate)?oldid=2305724"
Community content is available under CC-BY-SA unless otherwise noted.