Helping Dom and the crew.

To help Dom and the crew to stop and take down international terrorists and criminals (succeeded).

Leticia "Letty" Ortiz is the tritagonist of the Fast and Furious franchise. She is one of the two tritagonists (the other being Mia Toretto) in The Fast and the Furious, a supporting character in Fast & Furious, a mentioned character in Fast Five, the secondary antagonist turned major character of Fast & Furious 6, the tritagonist in Furious 7, one of the two deuteragonists (the other being Luke Hobbs) of The Fate of the Furious and the deuteragonist in F9.

She is portrayed by Michelle Rodriguez.

Letty was presumably born and raised in the same neighborhood as the Toretto family. She lived down the street from them. Letty took an interest in cars when she was ten years old. Dominic, a fellow car enthusiastic like his father, "always had her attention". However, when she became sixteen, Dominic became romantically interested in her.

Letty became involved in street racing in her teens. When she was fifteen years old, she participated in a street race against Dominic which resulted in both of their cars crashing. She managed to pull Dominic from the wreck of his car, almost losing her arm in the process.

When Letty was a teenager, she and Mia were caught up in an escape attempt somewhere in Boyle Heights. When they got trapped in a corner, Letty drove her car, a Ford Torino Cobra, through a retailing wall.

Letty is introduced as Dom's girlfriend and they have been friends since childhood. Although, Letty expresses some concern about Dominic's carjacking scheme she participates in every robbery. She is seen at Race Wars where she races and beats a fellow racer. In the end, during a botched highway robbery, she rolls her car and is injured but is saved by Dom and survives.

Letty, Dominic and his new crew hijack a truck in the Dominican Republic narrowly escaping. After Dom leaves her she goes to FBI agent Brian O-Connor to clear Dom's name in order for him to return home. Brian consequently puts Letty undercover with Arturo Braga as a driver running drugs over the US-Mexico border. However, after the job is complete she realizes that the leader of the team, Fenix Calderon, intends to murder the drivers: she escapes in her car.

However, she is chased by Calderon who manages to flip her car leaving her injured in the wreckage. As Calderon approaches intending to shoot her the car explodes throwing her into the underbrush and Calderon leaves her for dead. Brian was left to assume that she had died as did Dominic and Mia.

However, Letty is not killed by the explosion caused by Fenix and is instead hospitalized with amnesia. She was found two days later in the hospital, by Owen Shaw who had went there to kill her. However when he determined that she had no memory of her previous life, he decided she would be a good member on his team.

When Dominic discovers Vince has associated himself with Hernan Reyes after attempting to steal the device in the GT40. Dominic accuses Vince of betrayal, but Vince defends his character, and makes a point to say that Dominic's failure to listen to him about Brian O'Conner resulted in the loss of their home, family and the death of Letty.

Luke Hobbs is sitting at his desk at the DSS offices when U.S. Customs agent, Monica Fuentes, presents him with a file on a heist committed in Berlin. Attached to the file is a photograph of Letty suggesting that not only is she alive but she involved in large-scale criminal activity.

Hobbs approaches Dominic with the news that Letty is alive and asks him for his and his team's help in bringing down the international criminal Letty is working for: Owen Shaw. Dom agrees, only after Brian secures them full pardons for their assistance, though Dom had little interest in Shaw, which is shown during a chase scene in which he allows Shaw to escape in order to chase down Letty. After finally chasing her down Dom gets out of his car to speak to Letty. However, Letty shoots Dom before getting back in her car and taking off appearing to not recognize who he is.

When she arrives back to Shaw's lair, he questions her to see if she remembers Dom at all, to which she says she doesn't. Later, she meets up with Dom's team again, when going to investigate a phone call made by the man who made special vehicles for them. A shoot out ensues, in which her team mate, Ivory, is killed by Gisele. Letty tries to escape through the subways, but is followed by Riley. The two fight each other, and Letty tackles Riley down the stairs, and finally escapes on a subway train. She heads back to Shaw, and tells him that Ivory was killed, but his lack of caring frustrates her. Shaw then comes to her and tells her that he has a soft spot for her because she is a blank page who remembers nothing.

Letty tells him she needs some air and goes out. She is found by Dom and a race. The two race, and Letty, intrigued by Dominic, tells him to follow her. They meet up, and Dom tells her that he knows "everything" about her. He begins explaining the scars she has on her and how she got them. He also gives her the famous cross necklace. She grows emotional and leaves.

Later, Shaw asks her if she could kill Dom when the time comes, and she insist she can and even tells Shaw to keep the necklace. They continue with their plan, and attempt to hit up a convoy holding a chip that is worth billions. They steal a tank, and Shaw begins to run over innocent drivers. Letty is outraged at this and tells him that it was not part of the plan. Brian and Roman secure a car to the tank and use it as an anchor, hitting the car repeatedly to knock it off the bridge.

Shaw, angry, tells Letty to get on top of the tank and remove the cable before the car anchors them. She obeys, and is seen by Dominic who begins to drive faster, knowing that Letty will be killed once the car flips off the bridge. This is also known by Shaw who was using Letty to get to Dom. When the car flips and hits the bridge support, the tank flips and sends Letty soaring through the air. Dom speeds up and crashes his car into the railing of the bridge and catches Letty midair, they both crash into a car windshield, Dom looking at Letty, relieved she is uninjured.

Shaw is captured, and they all go back to the military base. When the guy in charge attempts to arrest Letty too for working with Shaw, Dom steps forward and says, "she's always been one of us". Brian then goes up to her to apologize, feeling that everything is his fault, to which she tells him that no one makes her do something she doesn't want to do.

She then goes to speak to Dom, and asks how he knew the car would break their fall to which he replies, "I didn't." They are interrupted after Hobbs brings Shaw in, who confesses to kidnapping Mia and demands to be released. Hobbs tells Dom that if they do that, they lose their full pardons, to which Dom agrees and Hobbs releases Shaw. He looks back and asks if "Babe" is coming, everyone looks at Letty for an answer, but is shocked when Riley steps forward saying, "Of course".

The team then prepares to save Mia, and Letty tells them that she is going with them. They all ride out, and Brian, Dom and Letty all get on the plane that Shaw is attempting to escape in. Letty then has another physical altercation with Riley, she is on the losing end until Hobbs tosses her a weapon, which she then uses to kill Riley and shoot her out of the plane. She and Hobbs escape, but Dom stays behind to secure the chip.

The plane eventually crashes, however they see Dom drive out of the plane. The team is relieved until the car flips. Letty searches the horizon for any sign of Dom and smile when she sees him walking out of the wreckage. She walks up to him and the two embrace. Holding hands, they walk back to Hobbs who asks what he would like as payment for getting the chip. Dom responds with, "1327", which is revealed to be his old address in the next scene.

The team is getting a BBQ together, and Hobbs arrives with Elena stating that they all are free. Letty thanks Elena for everything, saying she is an amazing woman. Elena tells Letty that Dom is an amazing man, and tells Letty to keep him out of trouble to which Letty laughs and tells her that that will never happen. Dom approaches Letty after they leave and asks if anything feels familiar. Letty tells him, no but that it feels like home. The two are last seen with Letty sitting on his lap as Roman says grace at the lunch table. 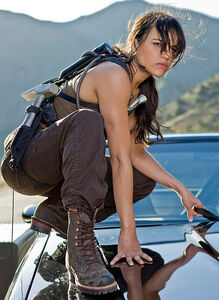 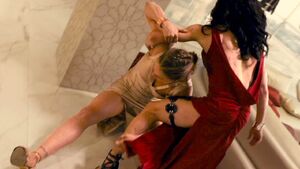 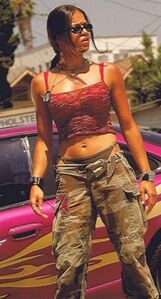 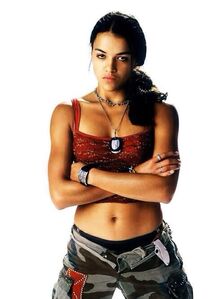 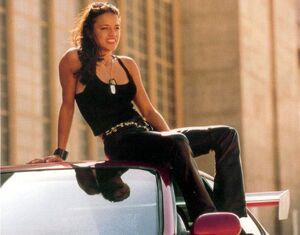 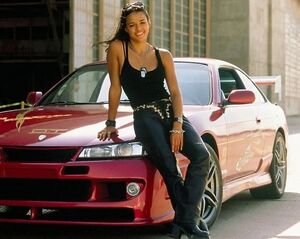 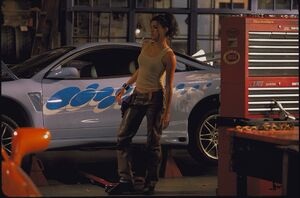 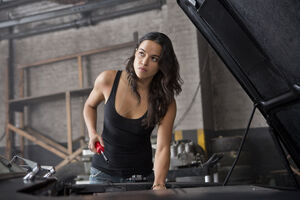 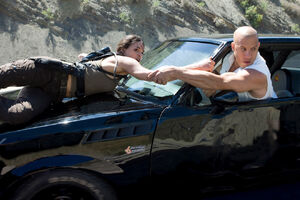 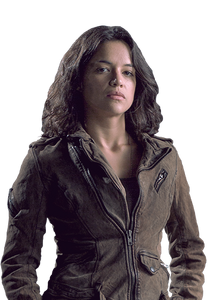