Levi (often incorrectly romanized as Rivaille) is a Captain in the Survey Corps, rumored to be the strongest soldier alive. He has a harsh and unsocial personality, but is well-regarded by his subordinates.

He is voiced by Hiroshi Kamiya in the Japanese version of the anime and Matthew Mercer in the English version, the former of whom also voices Tieria Erde, Yato and Yuzuru Otanashi.

Levi has a short, straight black hair. He has a pair of sharp blue eyes that look intimidating. Although his body is rather short, his body is well-trained. His face always looks not interested in anything, but he keeps many things in his mind.

Levi is known to be a "clean-freak", as he tends to want stuff to be spotlessly clean. Moreover, he is often blunt and unapproachable and he has a strong respect for structure and discipline. This makes him uneasy to be around. While Levi respects order and structure, he also seems to hold a distain for authority and the status quo. At Eren's tribunal, he insults the Military Police and the Wallists, calling them "pigs" and also noting that they are not capable of handling Eren. It seems he holds an open resentment for the Military Police, as later on, he further degrades them by stating that they never battle or even see any Titans, and suggests that they join the Scouting Legion.

When it comes to titans, he's quite merciless, killing them ruthlessly while keeping up his cold behavior.

Levi has been shown on a few occasions to be quite sadistic. When The Female Titan is captured, Levi proceeds to taunt her by saying how he will "cut off the limbs from her human body", and even admits that while she is suffering, he is "having fun". He even goes as far as to say he believes her and him are a lot alike, noting how they slaughter their enemies.

Despite his appearance, he does not undervalue human life; as he did not hesitate to grab a dying team member's blood soaked hand and comfort him in his final moments. He was shown later to be greatly disturbed by the loss of his entire squad. He cares greatly about his subordinates, and sustained an injury for the sake of protecting Mikasa, in spite of her blatant hatred for him and overhearing his vow to make him pay for beating up Eren.

Levi was born in the underground city to a prostitute named Kuchel Ackerman and one of her clients. When she found out she was pregnant, she decided to keep the baby, despite her older brother's opinion. She eventually died of an unknown disease when Levi was a child. Shortly after, Kenny, Kuchel's brother, showed up and noticed Kuchel lost weight. A skinny and dirty Levi told him she was dead. After the child told him his name, a shooked Kenny introduced himself as an acquaitance of her mother. Kenny then took the decision to look after his nephew, without revealing him their family link. He taught him everything he knew, especially how to fight, so that he wouldn't end up like his mother. Kenny eventually abandonned Levi when he was sure the boy could take care of himself, thinking he wasn't a decent parent.

Later on, Levi became a notorious thug. He met Farlan, who became his friend and crime partner. The duo later welcomed Isabel, a young lively girl who refered to Levi as Big brother. The trio used stolen 3D Maneuver Gear for their business. They were eventually caught by Erwin Smith who blackmailed Levi so that he'd join the Scouting Legion. Levi and his friends accepted the deal and became soldiers. This was actually part of a plan to steal a document which was in Erwin's possession.

When Eren gets out of his Titan body and is surrounded by titans, Levi comes back from his tour and rescues the group from them. Later on, after Eren wakes up in a cell, Levi insures him that the higher-ups will let him join the Scouting Legion and that he will make sure Eren doesn't get out of hand. During the trial, after Eren gets out of hand with his words, he assaults Eren, much to Mikasa's anger, as he teaches him his place. This was just an act to get the people to think that Levi can keep Eren down and that the police force cannot, assuring them that the Scouting Legion will take care of him.

Levi then assigns a new elite group that will protect Eren in their next tour. During their stay at the castle, Levi makes sure Eren is kept tamed and makes him sleep in the dungeon. Everyone in his special team respects him, and one of them even tries to talk like him, albeit failing at it. Levi was one of the only people that weren't afraid of Eren when he started to turn into a Titan, and he took charge quickly by calming the team down.

During the expedition to go in and out of the wall, Levi and his team lay in the back of the formation, not seeing any danger for a while. It wasn't until they got to the forest that they encountered the Female Titan. Eren could have defeated her at that time, but Levi's team convinced him otherwise. Levi later gave him the right to choose his next action. Later on, after capturing the Female Titan, Levi and Mike try to cut her nape but they failed. The scouting legion then retreated after the Female Titan screamed and got attacked by a huge group of titans.

After the female titan came back and killed Levi's team members and kidnapped Eren, Levi and Mikasa both joined forces to get Eren back. Levi told her not to try to kill it since they probably couldn't, so they decided to cut it up and get Eren out of her mouth. After many simultaneous attacks, Levi was able to take Eren out of her mouth and retreat with the others.

During the retreat to Karanese District, the remaining of Survey Corps is attacked by several Titans after one of the soldiers went out to retrieve back the body of his fallen comrade. As the Titans closes in on one of the carts, Levi, unable to fight due to his injury, orders the other soldiers to discard the dead bodies of their deceased members in order to lighten the weight of their cart and outrun the chasing Titans. After doing so, the cart was able to get some distance with the Titans.

In Karanese, while the Survey Corps is shunned by the public for their mission failure, Levi is approached by Petra's father who reveals him that she constantly wrote to her father. He tells Levi that as a father, he's worried about Petra's decision to dedicate her life to him, since she's still too young and has her whole life ahead of her. Levi keeps on walking silently without responding. A few days later, Eren is summoned to the capital for a trial to decide his fate. Levi, along with Erwin, Eren and others have a reunion in the old Survey Corps HQ prior to this, since Armin has a theory about the Female Titan's true identity. He himself, doesn't participate in the operation, though, and is only seen near Erwin during this time.

Levi is excellent at using the 3D Maneuver Gear, to a point that everyone says he is the best at it. He is also said to be as valuable as an entire brigade, far outweighing all of the other soldiers. He is said to have been extremely strong even before joining the Scouting Legion.

He has shown the capability of incapacitating Annie Leonhardt in her Titan form (A 15 meter deviant type), something which whole squads and even Eren in his Titan form couldn't accomplish. 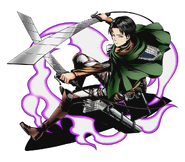 Levi Ackerman in Divine Gate
Add a photo to this gallery

Retrieved from "https://hero.fandom.com/wiki/Levi_Ackerman?oldid=809247"
Community content is available under CC-BY-SA unless otherwise noted.