CEO of Robinson Industries (in the future)

Lewis, later known as Cornelius Robinson, the future father of Wilbur and is the main protagonist of Disney's 2007 feature film Meet the Robinsons.

Lewis is an aspiring 12-year-old inventor who grew up in an orphanage. His energy and eccentricity has been scaring off potential parents, so he works all night on a machine to scan his memory to locate his birth mother, who abandoned him at the orphanage when he was a baby. While taking the scanner to his school's science fair, Lewis meets 13-year-old Wilbur Robinson, a mysterious boy claiming to be a time cop from the future. Wilbur needs to recover a time machine that a man wearing a bowler hat has stolen. Lewis tries to demonstrate the scanner, but it has been sabotaged by Bowler Hat Guy and falls apart, throwing the science fair into chaos. Lewis leaves while the Bowler Hat Guy, with the help of his robotic bowler hat named Doris, steals the scanner.

Wilbur meets Lewis at the orphanage and asks him to repair the scanner. Lewis agrees to do so only if Wilbur can prove he is telling the truth, which Wilbur does by taking them in a second time machine to the year 2037, which is extremely advanced technologically. When they arrive, Lewis realizes he can simply use the time machine to meet his mother; the resulting argument makes them crash. Wilbur asks Lewis to fix the time machine, and Lewis agrees on the condition that Wilbur has to take him to visit his mother afterwards. Reluctantly, Wilbur agrees and hides Lewis in the garage. Lewis accidentally leaves, however, and ends up meeting the rest of the Robinson family except for Cornelius, Wilbur's father and the inventor of the time's technologies, who is away on a business trip. Having followed Lewis, the Bowler Hat Guy and Doris try to kidnap him, but the Robinsons beat them back. The Robinsons offer to adopt Lewis, but change their mind when they learn that he is from the past. Wilbur admits to lying to Lewis about taking him back to see his mom, causing Lewis to run off in disgust.

The Bowler Hat Guy and Doris approach Lewis, and offer to take him to his mother if he fixes the memory scanner. Once he does, they double-cross him and tie him up. The Bowler Hat Guy reveals that Cornelius Robinson is, in fact, Lewis's future self, and that he himself is an adult version of Lewis's roommate, Michael "Goob" Yagoobian. Because he was kept awake by Lewis's work on the scanner, Goob fell asleep during a Little League baseball game and failed to make an important catch, costing his team the championship. Also, Doris is "DOR-15", one of Lewis's failed and abandoned inventions. They both blamed Lewis for their misfortunes and decided to ruin his life. Leaving Lewis in the future, they return to the past and enact their plan. However, it is revealed that Doris tricked everyone; once mass-produced, the Doris hats dispose of Goob and enslave humanity. Lewis repairs the second time machine, confronts Doris in the past, and destroys her by promising to never invent her, restoring the future to its utopian state. Wilbur tries to ask the adult Goob to join the family, but he has fled in remorse. 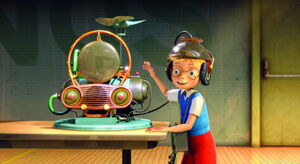 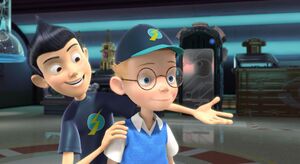 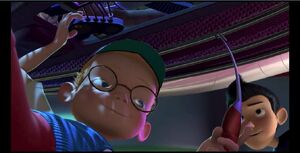 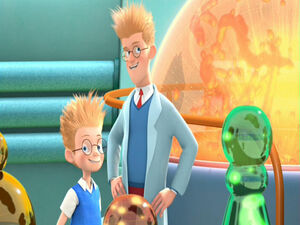