Spending time with Superman and his allies.

Stop his former friend from taking control of Earth in the Regime universe (failed).

Alexander "Lex" Joseph Luthor is one of the deuteragonists in the 2013 DC fighting video game, Injustice: Gods Among Us. Unlike the mainstream counterpart, this version of Lex is a hero in his universe. He has sided with the One-Earth Regime to gain Intel from the Regime Superman while in reality he is a spy for the Insurgency.

He was voiced by Mark Rolston.

Lex Luthor, much like the prime universe counterpart, was a billionaire and founder/owner/CEO of LexCorp. However, unlike his prime universe counterpart, he never was a criminal. He was even best friends with this world's Superman, that is until Superman was tricked by the Joker into killing both Lois Lane and their unborn child thinking he was fighting Doomsday. Because Lois' heartbeat was connected to a nuclear bomb the Joker planted in Metropolis, it went off destroying the city and killing all civilians, as well as most of other superheroes who were present in Metropolis' destruction, such as Teen Titans' Beast Boy and Kid Flash. Filled with grief over the loss of Lois and the citizens of Metropolis, Superman angrily kills the Joker in revenge, though the Joker laughs in triumph before he died, as he finally succeeded into driving Superman mad and evil, much to Luthor's dismay.

It is revealed that Luthor survived the nuclear blast that decimated the entirety of Metropolis by having a speedster quickly send him to a secure bunker under his payroll.

Shortly after Superman formed The Regime, he joined Batman's Insurgency and for five years, while under the guise of remaining Superman's friend, he assisted Batman in any way he could. He even assisted in bringing the prime universe's Justice League members, Batman, Green Arrow, Wonder Woman, and Hal Jordan, into their universe so they can help them in their fight against The Regime. The prime universe's Cyborg joined them, as well, later on although at first he mistakens Luthor and Deathstroke as villains in the alternate universe.

After being in a battle against the prime universe's Joker, who was accidentally brought into their world, and members of the Regime, Lex Luthor was then murdered by Superman under the watchful eyes of millions after he reveal his ulterior motive and betrayal to the Regime.

After his honorable death, and the defeat of Regime at the hands of the Earth Prime's Superman, Earth Prime's Cyborg visited the funeral of Luthor's grave before the latter departs to Earth Prime.

The prison named after Luthor was also built, which appeared in Injustice 2 and will be Superman's primary jail in the first half of the storyline.

Even though Lex was dead, his death wasn't in vain for the world saw what Superman truly became, which triggered a chain of events that would lead to the Regime's downfall: Superman was overcome with paranoia and decided that the world is ungrateful for his 'protection' and decided to set an example by destroying both Metropolis and Gotham before he would invade the Justice League's universe, thus showing his true colors. These actions by Superman caused Shazam to protest and he was slain by Superman personally.

Shazam's death inspired The Flash to defect from the Regime and inform Superman's plan to the Insurgency, eventually leading Batman of the main universe to go with an emergency plan: summon the main universe Superman, who was still the righteous superhero that had yet to break down, and he eventually helped and brought down Superman and the Regime.

Lex was given a proper burial, honored as a hero and gratitude of that world and the main universe's heroes at the end of the game.

Before his death in his suicide mission to stop the fallen Superman, Luthor sent Lucius Fox to send a message to Batman, such as entrusting all his fortunes to the Dark Knight, aware of his own death and the Insurgency's victory coming near. After the Regime is defeated, a merger company between LexCorp and a now-defunct Wayne Enterprise is formed under a new company name known as Luthor Wayne. 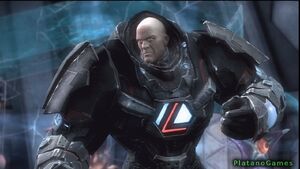 Lex Luthor revealing himself as a member of the Insurgency. 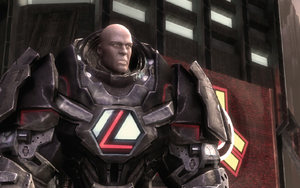