Lexi Reed is the main antagonist of the T.V. series A.N.T. Farm. Is a pretty but cruel, self-centered student at Webster High School. Lexi was the main antagonist in season 1 and 2, but in season 3, she is a minor antagonist and anti-hero of the show. She's the freshman president of student council and is on the cheerleading squad with Paisley Houndstooth. She was also the lead of all of the musicals at school until Chyna showed up in school. Lexi will do anything to be the one with the credit. For instance, in "Bad RomANTS," Lexi tries so hard to get on the cover of the school newspaper for popularity. She is Chyna Parks' biggest rival at Webster High School and thinks of her as her competition and threat.

Lexi is the cruelest and yet most popular girl at Webster High. She often puts people down and tries to mess with them, especially the ANTs. She has always been naturally beautiful and has won many beauty pageants in her childhood. Previous plays she starred in were Grease, Annie, and Fiddler on The Roof. She is very protective of her popularity status and is never a bimbo unlike other popular girls, and doesn't like it when other talented people are around her. She tries to sabotage people for the sake of her popularity, such as Chyna and Abigail Timmons, but it usually backfires. She also considers socializing with certain people bad for her own popularity. She's also not above exploiting or abusing others, even her best friend.

In "TransplANTed," she knocks Chyna out of Lexi's chair. Later, she hosts a party at her house to which Chyna, Fletcher and Olive Doyle show up at, much to her displeasure. When Chyna sings at the party, she is impressed yet jealous with her talent. At the end of the party Olive spills blueberry yogurt all over her outfit and she shrieks that her mom would kill her.

In "ParticipANTS," it is revealed she is captain of the cheerleading squad. Chyna and Olive both try out for the squad, but only Chyna makes it, which is secretly part of her plan. Chyna becomes "friends" with Lexi, Paisley, and the other cheerleaders, while Olive feels abandoned by Chyna. Lexi overworks Chyna at practice, so Chyna gets injured and loses her voice due to too much cheering. At the school musical audition, Lexi does a music number about candy and Chyna does a method acting thing about not being a freak. Chyna gets the part to Lexi's dismay.

In The PhANTom Locker, she appears briefly twice and tricks Cameron by telling him a lie of how to get rid of a person. She then appears when he realizes what she said wasn't true.

In SciANTs Fair, she makes Cameron go into the trash to look for her sunglasses, and they end of being in her backpack. Then, they find Principal Skidmore's cell phone and keep it for their andvantage. She gives all of the foreign language teachers the week off. Then, she and Cameron find out that Skidmore made a reward for whoever finds the phone. At first, she wants to give it back for $50, saying she ould buy 2 bottles of end of summer bronzer. But, Cameron convinces her to keep it longer so that they could get $100 and 4 bottles of end of summer bronzer. Then, she sees Skidmore talking to Cameron's dad and gets worried, making Cameron give the phone back, although they get caught and she tries to blame Cameron. However, Skidmore doesn't believe her and she gets into trouble in the end.

In StudANT Council, she denied Chyna's entrance to the school dance, forcing Chyna to run for Student Council which Chyna soon regrets.

In Bad RomANTs, she tries to get into the school newspaper by pretending to do a bunch of heroic things.

In The ReplacemANT, after Olive becomes the new history teacher, she and Chyna get detention from "Ms. Doyle." Later, she pulls a prank in the history room.

In CANTonese Style Cuisine, she and Paisley try to figure out why she hasn't been invited to a fellow cheerleader's birthday party.

In IgnorANTs Is Bliss, she enters Gibson's dog show.

In America Needs TalANT, she auditions for America Needs Talent, and she and Chyna are the only ones who get to go to Hollywood. When her bag is missing, she sets out with Paisley, dressed up as a maid, and find it. They find it in another man's room before she attacks someone for dropping her bronzer. Later, she tries to steal Chyna's song in which she fails to do so and ends up publicly humiliating herself on television instead. In the end, she and Chyna make up.

In ANTa's Little Helpers, she gets a job (along with Paisley) as gift wrappers at the mall (because she wants to get a butler). After Darryl Parks runs out of the mall because Roxanne Parks caught him spying on her, she ends up dressed like Santa Claus, having kids sit on her lap, with Paisley has an elf.

In You're the One That I WANT, when Chyna gets the lead in the school musical, Lexi tries to sabotage the show with the help of Fletcher, who doesn't want Chyna to fall for the leading man, Jared.

In PerformANTs, she tries to get backstage passes to a Blood Butcher concert, so she makes Cameron get the, for her. She ends up also enjoying the Happy FUzzy Friends.

In Some EnchANTed Evening, she gets grossed out that GIbson is the new cheerleading coach, so she kicks him out and the team competes without him.

In PatANT Pending, she pretended to be injured to get lots of attention the way Paisley is. She goes from 2 broken arms, 2 broken arms with 2 broken legs, and an indivisual head.

In Ballet DANTser, Lexi stars as the lead in a ballet musical, while trying to get rid of Violet. 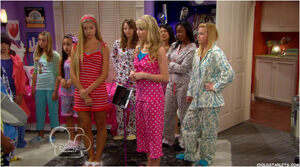 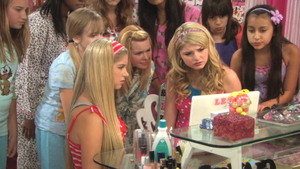 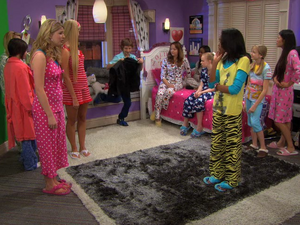 Add a photo to this gallery
Retrieved from "https://hero.fandom.com/wiki/Lexi_Reed?oldid=1702490"
Community content is available under CC-BY-SA unless otherwise noted.