Humanoid
Lexington is one of the main characters from Gargoyles. He is the smallest gargoyle in the Manhattan Clan.

He was voiced by Thom Adcox Hernandez.

Unlike the other Manhattan Clan gargoyles, Lexington's wings do not exist as fully "separate" limbs, but instead consist of membranes that are webbed to his arms with one extra set of "limbs" halfway down within the webbing, which allow him to glide like a flying squirrel.

He is often shown being eager, analytical and outgoing, and sometimes impatient; in the episode, "Upgrade", Lexington chooses his motto to be, "Speed is the key". He is named for Lexington Avenue, New York and can be recognized by his olive skin, his hairless head (like Broadway, but without any spikes) and the fact that his wings are not the classic "bat" configuration (as separate "limbs") of the other gargoyles in the clan, but are more like a webbed membrane between his arms and legs, akin to a flying squirrel, with one extra set of limbs below his arms that help support the membrane. Interested in science, Lexington adapted quickly to the technology of the modern age, as he demonstrates by figuring out how to control a motorcycle and a helicopter, and with well-developed computer skills. He became the clan's unofficial technie, taking leadership whenever technical obstacles needed to be overcome.

In an early episode, Lexington attempted to reach out to what he considered to be like-minded individuals: a group of television superheroes called The Pack. However, not only did he find that they were fake, but that they were mercenaries working for David Xanatos. Feeling betrayed, he often behaved irrationally where it concerned The Pack, especially their leader, Fox, though at the end of the series, he reconciled with Fox and vowed to specifically protect her son Alexander.

Lexington harbored bitter hatred against The Pack, but attempted to reconcile with Fox after moving back to the castle. 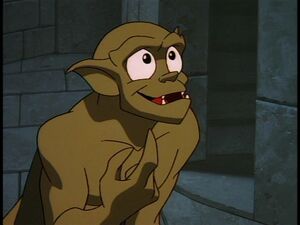 Retrieved from "https://hero.fandom.com/wiki/Lexington?oldid=1961217"
Community content is available under CC-BY-SA unless otherwise noted.