Dragon Queen (in her MKD ending)

Help Raiden and his allies to stop Onaga by any means possible and return Outworld.

Become the Dragon Queen before Onaga's defeat.
Gets her revenge on Shang Tsung and Quan Chi.
Protect her home Outworld, her people and her town.
Help correct Raiden's mistakes.
Obtain the god-like powers of Blaze to protect her people & her village.

Li Mei is someone who desire her village's freedom and sets out to win competes in the tournament hosted by Shang Tsung and Quan Chi. In Mortal Kombat X, she becomes an advocate for her people.

In her Armageddon ending, Li Mei gets her revenge on Shang Tsung and Quan Chi and banishes them into an obelisk, where the latter two will have to fend off wave after wave of enemies for all eternity.

After being rescued by Bo' Rai Cho, she becomes accustomed to wearing armored battle gear - this is due from being temporarily trapped inside a mummified soldier of the Dragon King's army.

Li Mei's main focus is to protect her people and her home she will do anything to keep them safe. Revenge, vengeance, justice, peace, freedom, or unlikely allies no more matter what Li Mei will use or do nearly anything to keep her town and people safe. She cares for her them as a good leader does. Even if it means claiming power of Blaze or becoming the wife of Onaga Li Mei's choices are done out of caring for the future of her people.

Li Mei's village was enslaved to let a small population of people construct the fortress for Shang Tsung around the Soulnado, a paranormal bright green swirling tornado of immense spiritual energy with the tortured souls trapped inside. Li Mei is the only one of her village's slaves who willingly rebels the minions and attacks the leader of the Black Dragon Clan known as Kano. If she likes to attend and win the Deadly Alliance tournament, she gains the attention of Quan Chi, who hosted it for the other participants, in order to liberate her villagers, recognizing the warrior spirit.

At this time, Li Mei is friends with the wanderer Shujinko, but during his 40-year quest, she is captured by Kano himself. Shujinko, as her mentor, offers to train her even though he feels that her chances in the annual tournament of the Deadly Alliance are slim. She later journeys to a nearby forest where she is attacked by Moloch and Drahmin. She escaped through the trees as Shang Tsung came and formed an alliance with the Oni. Her ending in Deadly Alliance depicted her beating Quan Chi's tournament and "earning" the right to be imprisoned for a long time in one of the bodies of the Dragon King's guards.

In Mortal Kombat: Deception, where she returned as one of the playable characters, Bo' Rai Cho rescues her from this fate called Deception. However, he is apparently only partially successful, and Li Mei takes on some aspects of these ancient warriors. It is revealed that, upon the return of the Dragon King Onaga, she is to be his queen. Her ending results in her willfully becoming the Dragon Queen.

In MK: Armageddon's Konquest mode, Li Mei fights Shinnok in the Netherrealm. She begins to gain the upper hand on him until Taven (who is unaware that Shinnok had turned evil) appears and makes her go away. Shinnok later reveals that this was all created as a test for Taven. Li Mei can be seen chained in Kahn's arena in the MK reboot.

Li Mei's first appearance in the alternate timeline is in Mortal Kombat (2011) as a minor character. Li Mei didn't take part in the events or tournament because she was one of Shao Kahn's prisoners. She made a cameo background appearance chained up in between two pillars in Kahn's Arena this is an action that Shao Kahn does to anyone he punishes. Li Mei wasn't the only displayed in front of the Arena audience she would sometimes be switched out for another prisoner Tanya or someone else. The heroes who were fighting Shao Kahn and his forces could only help her and the other people suffering in Outworld by defeating the emperor.

Li Mei was also show in Raiden's visions she was one of the Fallen dead warriors but her parts were small, minor. Raiden didn't attempt to recruit her or any of the or others who had small support in his visions Raiden only picked the heroes who were at the main center of all of them.

Li Mei appears one time in Mortal Kombat X, where she is seen at the Refugee Camp. Li Mei shows up in Earthrealm with her people seeking protection and help. Li Mei and her people opened a portal near the docks bringing nearly five-thousand Outworlders to Earth. Li Mei waited patiently for Johnny Cage and the team to arrive back to Special Forces.

After their arrival and hearing how many people came through the portal Kung Jin said that the war must be really bad and the people must be really desperate to risk coming to Earthrealm. The team enter a tent to find Li Mei she then proceeds to tell them how bad things are Mileena attacking the innocence with Shinnok's amulet because they won't side with her. And the emperor Kotal Kahn who wants to unite Outworld has grown so desperate to stop Mileena and her Rebels though he is not killing innocences but he is letting them die in the battles between his forces and Mileena's.

Li Mei also tells them about an Earthrealm who is apart of Mileena rebellion a human with a glowing eye Kano. The team heads to Outworld to talk with Kotal Kahn and his loyal guards. While Sonya Blade, Kenshi and Johnny Cage stay in Earthrealm later Li Mei is with Sonya and Kenshi to make sure things are going okay with the refugees. The three of them also are also keeping an eye out for Kano who Sonya Blade knows that this is going to be the way he returns to earth. 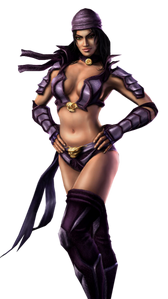 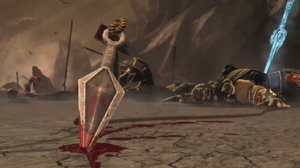 Li Mei's body (in the far left) shown in Raiden's vision of the original timeline in Mortal Kombat (2011). 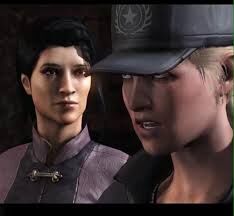 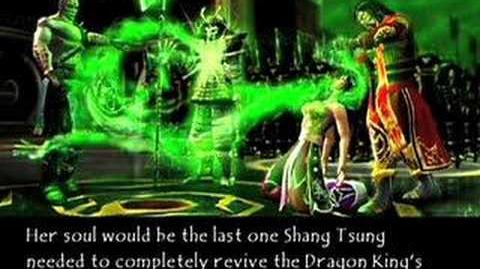 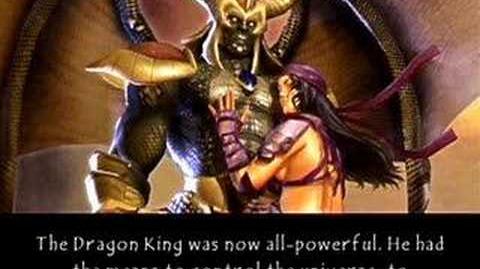