Pretty Boy (by Mushu and Yao)

General of the Imperial Army (promoted)

Keeping his army in order.

Please his father and defeat the Huns (succeeded).

Escort the three Princesses of the Middle Kingdom safely to Qui Gong (formerly).

Li Shang is the tritagonist of the Disney film Mulan and the deuteragonist of its sequel.

He is voiced by BD Wong with Donny Osmond doing his singing voice. In the Chinese versions, he was voiced by Jackie Chan.

Shang is the son of General Li, and later husband of Fa Mulan. the head of the Chinese army. During his appointment in the first movie, he is a highly capable leader with a dedication to his cause. It is mentioned that he was first in his class in regards to military affairs and was knowledgeable in training tactics. He is often disparagingly called a 'Pretty Boy' due to his dashing good looks and strong physique.

With the weight of China's safety within his hands, Shang was a powerful, no-nonsense force during his time as the general of his division. When dealing with his soldiers, as well as his supervisor, Chi-Fu, he relied on verbal and physical force to get his messages across, with his training methods evidentially being brutal and exhausting, though effective in the grand scheme of things, showing an efficient leader behind the harsh exterior.

A major theme in the film involves gender stereotypes, both male and female. This is relevant in Shang's case as, through his song, "I'll Make a Man Out of You", as well as his treatment towards Mulan following the events of her reveal, he is shown to be internally sexist, having been brought into a society where women are looked down upon, while men and exaggerated masculinity was ideal. Nevertheless, Shang is capable of having his viewpoints changed, as Mulan was undoubtedly bravery and capability was enough to prove gender is no matter in terms of heroism deserving of praise, being one of the first individuals to take up for the latter after her sheer wit led to the defeat of feared Hun Shan Yu.

Also, despite his skill at military affairs, he seems to be somewhat lacking in social skills, as he has trouble telling Mulan about his romantic feelings for her, or even properly congratulating her following her success in saving China, coyly using the grammatically incorrect "You fight good." statement to do so. This is further explored in the sequel, where he is shown to be a polar opposite of Mulan, as the former is quick to discard his true feelings and emotions for the sake of missions and assignments, whereas Mulan follows the mantra of "one's duty is to one's heart". Nevertheless, both sides of the coin can be consequential, allowing both Shang and Mulan, when joined together, to balance one another out, establishing a healthy relationship both professionally and romantically.

Shortly after his initial introduction in the film, Shang is appointed as an army captain by his father General Li. The appointment comes at the protest of Chi-Fu, who claims that Shang is too young for such responsibility. General Li defends the choice, noting Shang's numerous accomplishments as well as his impressive military lineage. As a slight compromise, Shang is ordered to train the new recruits, and then, pending Chi-Fu's approval, joins the main army in the Tung Shao Pass. Shang is initially excited at the prospect but is slightly disappointed when the new recruits are shown to be lacking in skill. After hard training, however, he can turn them into respectable soldiers. Shang then goes to Chi-Fu, who refuses to grant his approval, despite Shang's protests. Chi-Fu disparages both the soldiers and Shang, hinting that he believes Shang only became captain because of his father. Chi-Fu then threatens that Shang's troops will never see battle after the General reads his report.

A letter later comes for Shang (supposedly from the General, but faked by Mushu) asking him to take his troops to the front. Coming to a village in the mountain pass, they discover that the village had been razed by the Huns. While searching for potential survivors, Shang learns that the entire army (including his father) perished in the battle. Shang takes a moment to mourn, making a small shrine to his father, before taking his soldiers in pursuit of the Huns, who are headed toward the Imperial City. They soon meet the Hun army after Mushu accidentally fired a cannon causing his position to be given away to Shan Yu and the Huns, only to learn that they are hopelessly outnumbered. Shang prepares for a last stand. However, a soldier named Ping (who is Mulan in disguise) can stop the Hun army by causing an avalanche. Shang is caught in the avalanche but is saved by Ping.

In the aftermath, Shang thanks Ping and accepts "him" as a trusted friend. However, while Ping is receiving treatment, it is discovered that "he" is a woman named Mulan. Though the law states that a woman who is discovered in the army is to be killed, Shang spares her due to the debt he owes her for saving him. Shang then leaves Mulan and leads his army to the Imperial City. Chi-Fu attempts to beg him to execute her but he angrily refuses as she had saved his life; he repays his debt of gratitude.

At the Imperial City, Shang and his troops are to be honored for defeating the Huns. However, he is seen to be downcast due to Mulan. Mulan suddenly arrives in the city, claiming that the Huns are alive. Shang refuses to believe her, as she had lied about her identity, but her claims are soon found to be true. As Shang is being honored by the Emperor, Shan Yu and several Huns kidnap the Emperor and lock themselves in the palace. Shang attempts to lead a rescue mission but initially fails. Mulan takes charge and along with Yao, Ling and Chien Po can climb up pillars onto an upper floor. While Mulan and the trio distract the Hun guards, Shang rushes to a balcony and fights Shan Yu. The trio can take the Emperor to safety, but when Shang is knocked out, Mulan chooses to forgo her safety to assist him.

After Shan Yu is killed, Shang is seen running outside of the palace, where Mulan falls on him. He later defends Mulan as a hero when Chi Fu begins scolding her. Shang is among the first to bow to Mulan when the Emperor honors her as the hero of China. As Mulan prepares to go home, Shang attempts to tell her how he feels but ends up stuttering out a reference to her fighting talents. Shang is shown to be disappointed in his failure, but after being counselled by the Emperor, he chooses to travel to Mulan's home to see her. He speaks to her, somewhat nervously, under the guise that he was returning a helmet she had left. As Mulan's father, Fa Zhou realizes what Shang is trying to say, he motions to Mulan, who then invites Shang to dinner that night, which he greatly accepts.

Li Shang is the instructor of the camp. First, the campers thought Mulan was the one who started the clamor. He is later seen training with his campers for fighting against Shan Yu's army. During the battle of Shan Yu, Shang is battling against the Huns. Listening to Chi-Fu who is telling Mulan about lying, Shang tells Mulan that she doesn't belong to China. Trusting Mulan, he is later seen fighting the elite Huns who survived the snowfall and then running off the ambushed roof. Shang later appears in Mulan's home about a misunderstanding in lying.

In Mulan II, Shang becomes the deuteragonist and The Lancer to Mulan throughout the movie. One month after Shan-Yu's death, the film begins with him proposing to Mulan, to which she gladly agrees. During a meeting with the Emperor, he is promoted from captain to general. Shang and Mulan are directed by the emperor to escort his three daughters to a neighboring kingdom in hopes that an arranged marriage between them and the three princes of the opposing nation will form an alliance against the Mongols, who are threatening to attack the northern border of China.

He and Mulan go through much conflict around their romantic relationship, which is mostly instigated by Mushu. Midway through the film, he and the group are attacked. Shang and Mulan are left dangling from a bridge. Since the bridge cannot support both of them, Shang lets go to save Mulan. When the Princesses reveal that they don't want to go through with the marriage, Mulan offers to take their place, as Shang is presumably dead. At the end of the film, however, it is revealed he somehow survived the fall (with help from his horse), and Mushu saves the day by pretending to be the Golden Dragon of Unity and freeing the princesses from their vows. Mushu (still posing as the Golden Dragon) marries Shang and Mulan, using that as the marriage to bring peace and harmony between the two neighboring kingdoms of China. Mulan later tells Shang about Mushu and Shang makes the choice to combine both families' temples so that Mushu can remain as Mulan's guardian and most trusted confidant.

Li Shang is now the general of China. Shang attempts to marry Mulan, but Mushu is breaking the duo up in the camp. After having a breakup with Mushu, Shang tells the trio Yao, Ling, and Chien Po to escort the princesses (Su, Ting-Ting, and Mei) without ever saying a word to them. When the bandits start to ambush, Shang falls off the location. Mulan thinks that he is dead, but Shang survived the fall. Near the end when he is alive, Mushu (pretending to be the Golden Dragon of Unity) saves the day. After that, Mulan can marry Shang to bring peace to the kingdoms.

Shang only appears in the episode "Max's New Car". Shang makes his only appearance with no lines.

Shang is a face character who rarely appears in the theme parks. 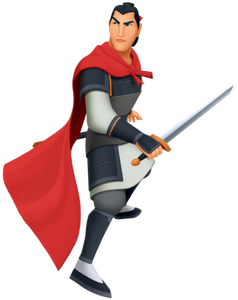 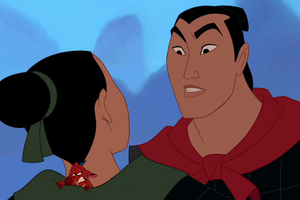 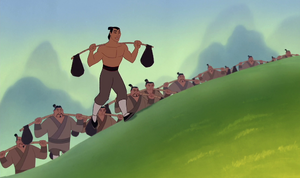 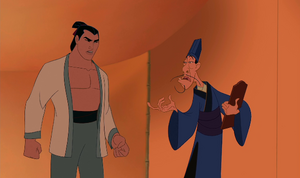 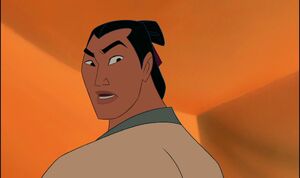 Shang surprised to hear his unit is being called into battle. 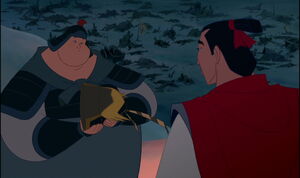 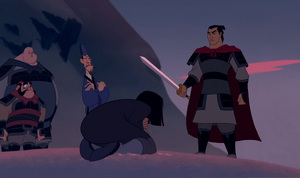 Shang being ordered by Chi-Fu to execute Mulan 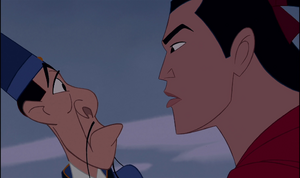 Li Shang angrily refusing Chi-Fu's orders to execute Mulan and instead choses to spare her. 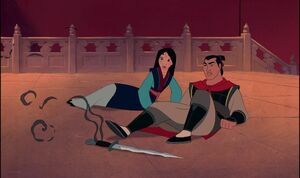 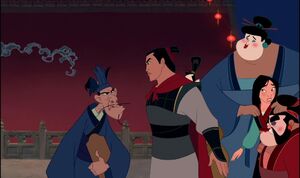 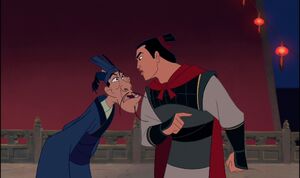 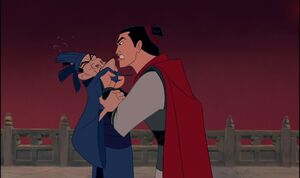 Shang about to attack Chi-Fu when he coldly states Mulan would never be worth anything. 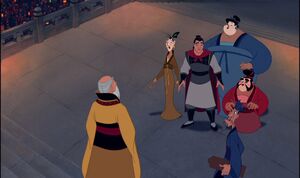 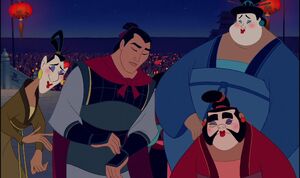 Shang, Yao, Ling, and Chien Po allowing the Emperor to speak to Mulan. 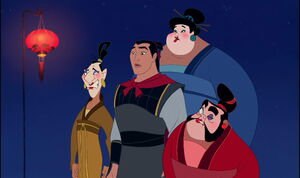 Shang watching the Emperor rebuke Mulan for the deeds she committed. 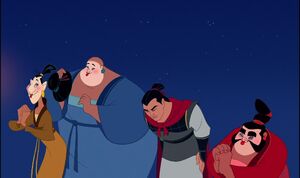 However, when the Emperor gratefully praises to Mulan for saving China and bows to her, Shang follows the Emperor's example. 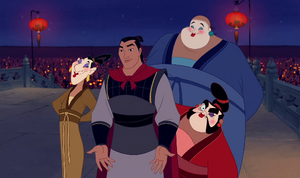 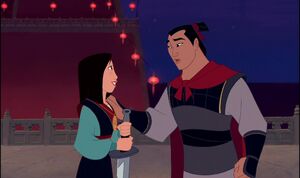 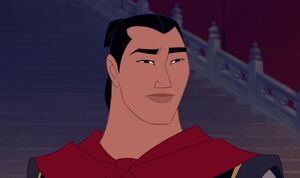 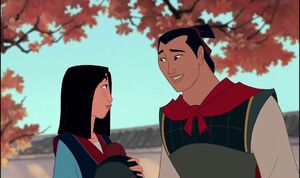 Shang and Mulan developing a relationship.
Add a photo to this gallery

Retrieved from "https://hero.fandom.com/wiki/Li_Shang?oldid=2195615"
Community content is available under CC-BY-SA unless otherwise noted.