Queen of the Hidden World

Invisibility/Cloaking
Same attributes and powers as a Night Fury

Keep away from humans (formerly)

Get revenge on Grimmel for obliterating her kind and putting her under his tyranny.
Help Hiccup and his people.
Bring peace and prosperity to the dragon race in the Hidden World, along with Toothless (all succeeded).

She is a Light Fury with a very pale blue underbelly with striking blue eyes. She has six limbs, that consists of two wings and four powerful legs. She has a fin that goes along the sides of her tail which ends with a smooth heart-shaped tail flap. She has four nubs on her head and a small nose. Though Light Furies may be the smallest species of furies, they rival the Night Fury in brute strength, intense intelligence, and firepower. It is seen that this Light Fury is much stronger than Toothless, seeing as she was able to carry him effortlessly. She is also able to throw Hiccup quite a distance.

She was at first afraid of humans and initially attacked Hiccup and Astrid when they first met. However, in the end of the film, she was no longer afraid of humans, and she even saved Hiccup's life when he fell to the sea and was about to die (or at the very least, be injured).

It is first seen when Toothless inspects the dragon cages on the hunters' boats when the Berkians come to liberate them but he did not see her because of her camouflage. Later, she is delivered to the warlord who then gives it to Grimmel the Grisly to use it to capture Toothless and capture all Berk's dragons.

On Berk, Toothless feels the presence of the Light Fury and starts looking for her and finds her in the woods. At first, she seems to be wary of the Night Fury but she soon calms down and the two Furies begin to exchange what seems to be a short conversation until Hiccup and Astrid accidentally reveal their presence. The Light Fury, not liking humans, shoots them and then flees, leaving Toothless clueless.

The next day, as the Berkians fly on the backs of their dragons to find a new island to inhabit, the Light Fury flies not to far away from them, allowing Toothless to notice her presence and to detach himself from the group to find her. A few meters higher, she rushes on Toothless and Hiccup, catches Hiccup by surprise and throws him in the void but Toothless saves him in time, which frightens the Light Fury, who fled again.

As night falls, she prowls next to the Berkians' camp and Toothless wakes up the moment he smells her and goes back in search of the Light Fury. The two dragons are outside the camp and Toothless is excited to see her again but makes too much noise, making her grumble at him to calm down and beckons him to come with her. They arrive at the edge of the lake where she starts a small nuptial dance which pushes Toothless to try only his dances are disastrous and ends up boring the Light Fury to which she goes to hangs on a tree. In his last attempt, Toothless draws her face in the sand which seems to make him happy and impress the Light Fury. The two dragons then exchange loving looks and she invites him to fly with her (which Toothless can not do because of his tail) until she spots Hiccup hidden in the thickets, pushing her to leave again.

Later, (after Hiccup made Toothless a prosthetic tail) Toothless flies out alone to find the Light Fury in the sky. After finding her, the two soar through the sky together. Soon, they enter a typhoon where the Light Fury attempts to teach Toothless to camouflage himself, to no prevail. Finally, Toothless manages to use camouflage after attracting lightning to his body and this effort impresses Light Fury. She then helps Toothless to catch his breath after his successful attempt, then they fly even higher and Toothless licks the forehead of the female dragon to his and her great pleasure. Soon after she shows him to the Hidden World.

In the Hidden Word, the Light Fury and Toothless now appear to be a relationship, while Toothless assumes the role of Alpha of the Hidden World Dragons. However everything changes when Hiccup and Astrid infiltrate this world and are discovered by the dragons who try to kill them until Toothless saves them and is forced to leave his new home, abandoning the Light Fury which he deeply regrets. Despite that, the Light Fury follows them back to the New Berk and the two dragons are happy to meet again but Grimmel and his armies attack the island and capture the two Furies and threatens to kill Light Fury with a giant crossbow if Toothless does not oblige to make all the other dragons surrender.

When all seems lost, Hiccup and his friends arrive and release the dragons from their cages. So, Grimmel tries to kill the Light Fury but Toohless stops him by destroying the crossbow with his plasma fire. Hiccup grips the platform where the two Furies are being kept prisoner but Grimmel poisons the Light Fury with the Deathgrippers' venom, forcing Toothless to obey the despicable dragon hunter who tries to flee on the Light Fury's back. Hiccup and Toothless pursue him and despite the interference of the Deathgrippers that they had managed to eliminate, Hiccup uses his flying suit to hit Grimmel who tries to hit him with a dart of Deathgripper venom that Hiccup dodges but hits Toothless, who fails to dodge the shot. Toothless falls but Hiccup manages to knock Grimmel off the Light Fury but he clings to Hiccup. Seeing Toothless falling at an alarmingly fast rate, Hiccup removes the equipment from the Light Fury, releasing her from the poison and then tells her to save Toothless before letting go so he does not slow her down. The Light Fury, who is surprised by Hiccup's selfless act, then rescues Toothless and brings him safely to the cliff. Unexpectedly, she returns to save Hiccup and catches him before he hits the water (unlike Grimmel, who plummets into the water) then gives him a friendly smile before taking him safely to Toothless. After reuniting with Toothless, Hiccup tells them to leave because it is not safe for them. Sadly Toothless sends out his alpha roar sending the Light Fury flying off first, acting as a guild for the other dragons.

Ten years later, she and Toothless have had three Night Lights and are visited by Hiccup, Astrid, and their two children. She is one last time seen flying with Toothless, Stormfly, and their human friends to the sky. 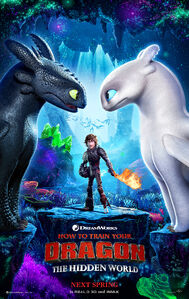 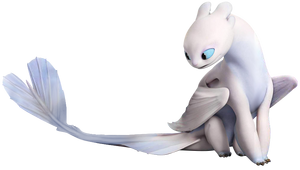 Light Fury invisible in her cage.

Light Fury imprisoned as she's presented to Grimmel the Grisly by the warlords.

Light Fury having been taken to Berk by Grimmel.

Light Fury becoming aggressive when she sees Toothless approaching her.

Light Fury seeing how friendly Toothless is as he slowly approaches her.

Light Fury about to fly away.

Hiccup hanging on to the Light Fury.

Light Fury smiles at Hiccup after saving him.

Light Fury, Toothless and their children. 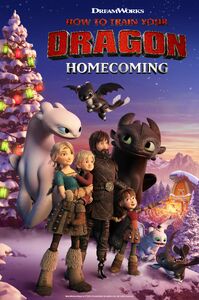 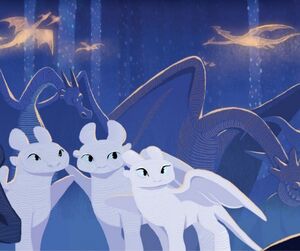 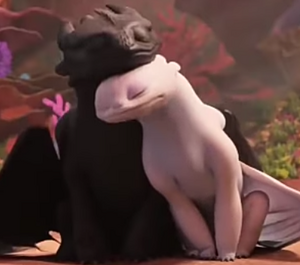 Toothless and the Light Fury nuzzling in how to train your dragon: homecoming