Lightning Rod is a storm giant in Skylanders: Spyro's Adventure.

Lightning Rod once lived in the majestic Cloud Kingdom, where his countless acts of heroism along with his winning smile and electric physique made him the most famous storm giant in the realm. He was a true celebrity, and the palace halls were littered with statues of the chiselled hero. But all the praise and admiration could never quite satisfy Rod, who yearned for something more. As luck would have it, he met an adventurous young dragon named Spyro, who told him fantastic stories of faraway places and dangerous adventures. Rod was spellbound, and he set off with Spyro to seek an audience with Eon to join the Skylanders. 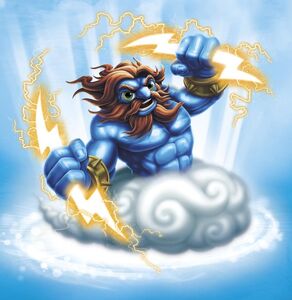 Series 2 Lightning Rod.
Add a photo to this gallery

Retrieved from "https://hero.fandom.com/wiki/Lightning_Rod?oldid=2178143"
Community content is available under CC-BY-SA unless otherwise noted.