Lightray (real name Solis) is a fictional superhero in the DC Comics, and is a friend of Orion and an ally of Superman and the Justice League. He is the New God of Joy from the world of New Genesis and a hero in the DCU, having gained his energy powers from a Apokolips soldiers who became solar powered beings.

He was created by the late Jack Kirby, and first appeared in New Gods #1 in February-March of 1971.

Lightray is a New God, deities created from the Old Gods, who uses his abilities of speed and light in the never-ending war between his planet, New Genesis and the ravaged wasteland Apokolips. Lightray fought alongside Orion and both served Highfather loyally in the fight against Darkseid and his minions continued to thwart his plans of conquest.

Lightray eventually joined the Justice League, along with Orion, to protect the earth, that was decreed to be under Highfather's protection, from the invasion from Apokolips and other enemies alike. When the android Amazo returned to Earth and threatened its citizens, Lightray joined an emergency team of League members and tried to fight him but, Amazo's ever-growing powers proved futile.

Lightray later aided the Justice League with Orion and Big Barda with the Earth was invaded by a vicious alien warlord. When Infinity-Man, called the New Gods Killer, invaded Earth and killed many New Gods, Lightray fought his best to stop him but lost his life and passed on through the Source Wall. Lightray, along with many New Gods, including Orion. Barda and Mister Miracle, were later shown reincarnated in the ruins of Apokolips creating a newer New Genesis.

Solis was born a New God who had a brother named Arkal who's death affected him deeply, and Solis was comforted by Orion, the son of Darkseid. One day while exploring, Solis and Orion discovered a large hole on New Genesis, and learned that the large hole was an outpost of soldiers from Apokolips. The soldiers had been transformed into beings composed of solar energy from an energy bomb, and attacked Solis with energy blasts. Solis was left in a coma, but when he recovered, he realized that he gained solar energy powers. He proceeded to master his powers and went by the name "Lightray", and helped Orion during the battle against Apokolips.

Lightray alerted and helped Superman stop an Apokoliptian incursion, and then greeted an assembly of heroes on Earth to New Genesis regarding a threat to the universe. He revealed that Metron unleashed four aspects of the Anti-Life Entity that could destroy all existence if they didn't stop it, and Lightray worked with Starfire to find Adam Strange when the Aspect had infected the Rannians with madness. Lightray and Starfire managed to stop the Apsect, with the latter destroying the doomsday bomb to save the planet Rann. After the events, Lightray and Orion joined the international branch of the Justice League, but the two later left the team after the battle with the Evil Eye. After leaving the team, Solis returned to New Genesis to continue adventuring, but later died when falling to Earth during a meteor shower. He was founded by Jimmy Olsen, and Lightray said the word "infinite" before apparently dying from a large flash of light. He was resurrected along with the other New Gods on the Fifth World, and continued his adventures. 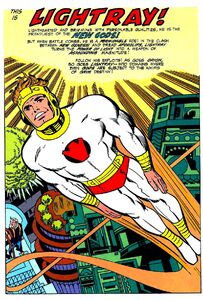 Lightray in Superman: The Animated Series 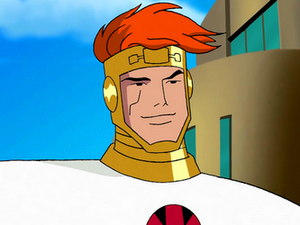 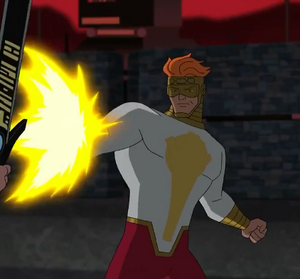 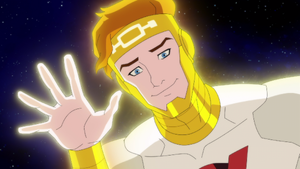