Lilandra Neramani is a supporting hero from the X-Men franchise. She was the on and off empress, or majestrix, of the Shi'ar space empire who fell in love with Charles Xavier, the mentor of the X-Men.

She often dealt with the machinations of her evil siblings D'Ken and Deathbird.

A member of the royal family of the Shi'ar Empire, Princess-Majestrix Lilandra Neramani was born on the Shi'ar homeworld known as the Aerie. The eldest heir to the Shi'ar throne was Lilandra's older sister, Cal'syee. However, for her crime of killing her mother and one of her sisters, Cal'syee was denied the throne and exiled into space. Cal'syee's younger brother D'ken was appointed majestor (emperor) instead.

Lilandra, D'Ken's younger sister, served as Grand Admiral of the Imperial Fleet. D'Ken was insane, and Lilandra learned that he intended to make use of the incredible power trapped within the M'Kraan Crystal.

The insane D'Ken was blind to the true danger that the Crystal presented, and believed he could control its unleashed power and use it for his own ends. Lilandra opposed his plans in the High Council, and D'ken had her arrested. He then had word leaked that she had tried to kill D'ken and usurp the throne. Civil war broke out in the empire as a result. D'ken had Lilandra held captive aboard the imperial flagship before she was to be executed, but Lilandra escaped in a small starship.

Lilandra needed help to stop her brother from destroying the universe. Then she mentally saw the image of the Earth telepath Charles Xavier , who at that time had used his powers to unite much of the collective will of Earth humanity to create enough psychic force to drive off the invading alien Z'nox. Knowing of Earth and its large number of superhuman beings, Lilandra traveled there for help. She finally met Xavier but was soon captured by the Shi'ar agent Shakari, who transported her through an artificially created stargate through hyperspace to the world where the M'Kraan Crystal stood. Xavier's team of superhuman mutant champions, the X-Men, followed through the stargate to the same world. There the power of the Crystal began to be unleashed, but the universe was saved from annihilation by the being known as the Phoenix, who had taken on the form and persona of .Jean Grey.

D'Ken went incurably insane and nearly catatonic as a result of a psychic attack on him within the Crystal. Xavier returned to Earth and Lilandra joined him there, to await the decision of the Shi'ar High Council as to whether she should now become empress despite her having rebelled against D'ken, the former emperor. Lilandra and Xavier became lovers, and, when the Council decided in Lilandra's favor (and when Xavier mistakenly came to believe the X-Men had died in battle), they left for the Shi'ar Throneworld.

Lilandra became Majestrix (empress) and Xavier became her consort. Xavier returned to Earth on realizing the danger that Phoenix presented to it. After Phoenix went insane and destroyed both a Shi'ar starship and an inhabited world allied with the Shi'ar, Lilandra demanded that the menace of Phoenix be ended forever to safeguard the cosmos. Xavier demanded a trial by combat to decide the fate of Phoenix, whom he believed to be the real Jean Grey, but during this trial by combat, Phoenix committed suicide to prevent herself from wreaking further destruction.

During her second exile Lilandra allied herself with the Starjammers, a group of interstellar adventurers who had aided her in the past. Sensing telepathically that her lover Xavier was dying, Lilandra and the Starjammers' leader, and Cyclops father, Corsair, journeyed through an artificially created stargate from the Shi'ar Galaxy to Earth and back, taking Xavier with them. The advanced medical technology of the Starjammers fully healed Xavier's injuries, but they were unable to return him to Earth since their own ship's special hyperspace drive for intergalactic travel was damaged, and the Shi'ar stargates were all now heavily defended against Starjammer intrusions. Lilandra, Xavier and the Starjammers travelled through space as exiles and rebels.

After some time, the Kree Supreme Intelligence masterminded a war between the Kree Empire and the Shi'ar Empire. Lilandra readied a so-called Nega-Bomb to be used as a final weapon of mass destruction against the Kree, but later agreed not to use it after intercession by the Earth heroes, the Avengers . However, the bomb was hijacked by the Skrulls and detonated in heart of the Kree Empire. Decimated, the Kree Empire was annexed by the Shi'ar, and Lilandra appointed Deathbird as viceroy and ruler of Hala, the Kree homeworld, in return for Deathbird's assistance during the war.

On the eve of the official ceremony incorporating the Kree into the Empire, Lilandra had Xavier and some of the X-Men teleported to Hala. While there, they uncovered a rebellion, and, although the dissident`s leader helped them defuse a sun-killer bomb, Lilandra was still forced to arrest him. The tension between legality and morality drove a wedge between her and Xavier.

Lilandra presided over a meeting of the intergalactic council, where, despite her efforts to the contrary, Earth was determined as a threat to the entire cosmos and was to be regarded as an intergalactic penal colony. Lilandra was able to dispatch former X-associate Cerise to Earth to warn the X-Men.

While Lilandra was successful at regaining the throne, a greater threat loomed: Cassandra Nova. Cassandra took possession of Lilandra's mind and body to force the Shi'ar Imperial Guard to annihilate the X-Men. The damage to Lilandra's mind was so great that she later attempted to assassinate Xavier, whom she believed was Cassandra. The X-Men foiled the plot, but Lilandra's marriage to Xavier was annulled and she returned to her people to recover.

Lilandra again lost the throne during her recuperation from Cassandra Nova's attack when a group of D'Ken loyalists arranged for her mad brother to emerge from his coma after years of inactivity. None expected the turn of events that followed, however, as Deathbird's newly recognized human husband Vulcan killed D'Ken and claimed the throne by right of conquest and his new ties to the royal lineage. Lilandra was once again forced to go on the run with the Starjammers and the Guardians of the Galaxy.

Lilandra was tragically killed by Darkhawk , who was possessed against his will by a Raptor loyal to Vulcan.

As a member of the alien Shi'ar race, Lilandra's physical abilities are somewhat greater than that of a human woman. Lilandra also has limited telepathic abilities whose extent have yet to be clearly defined.

Lilandra is an excellent hand-to-hand combatant and swordswoman, trained in Shi'ar methods of armed and unarmed combat. She is also a good starship pilot. 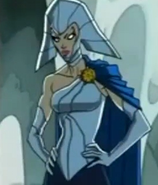 Lilandra in Hulk and the agents of SMASH. 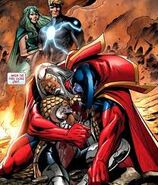 Add a photo to this gallery
Retrieved from "https://hero.fandom.com/wiki/Lilandra_Neramani?oldid=1951984"
Community content is available under CC-BY-SA unless otherwise noted.