Start a Wiki
Lilica Felchenerow is the daughter of a human mother and a demon father. She enjoys skipping school and skating around town on the roller blades her father bought her, which she enhanced with ether-powered motors. Her Arcana is Tempestas (Wind), who was once gravely wounded but nursed back to health by Lilica. She is voiced by Mayako Nigo.

Lilica's mother is a human, and her father is a demon. Lilica inherited her powers and her demonic features from her father. She enjoys skipping school and skating around town on the roller blades her father bought her. She loves playing pranks on people and has very little patience for things that don’t interest her. Because of her magical ability, she can sense a disturbance in the skies above Tokyo, but she really does not seem to care all that much. Also, Lilica is a close friend to Yoriko Yasuzumi, in despite of their incident.

The inline skates Lilica loves so much were given to her by her father on her tenth birthday. Because he did not know her shoe size, he accidentally got her skates that were too big for her at the time. However, this only made Lilica happier because it meant she could wear them for a long time and not outgrow them. Lilica has customized them a number of times over the years. Last year, she saved up enough money to install ether-powered motors on them. These motors react to Lilica’s magical ability and can accelerate and decelerate instantaneously. There are no skates like them in the world, and anyone but Lilica would probably find them too cumbersome to wear. Nevertheless they’ll always be her prized possession. 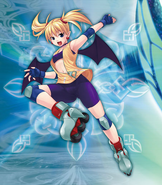 Arcana Heart 3
Add a photo to this gallery

Retrieved from "https://hero.fandom.com/wiki/Lilica_Felchenrow?oldid=1689405"
Community content is available under CC-BY-SA unless otherwise noted.