Lillia, also known as The Bashful Bloom, is a heroic playable champion in the multiplayer online battle arena game League of Legends.

After a war broke out in the world outside her forest home, dreams started appearing less and less. She did her best to try and take care of the mother tree during this time, but eventually, Lillia decided seeking out the dreams of mortals after she had realized how little of them were reaching the ancient Dreaming Tree. She is currently searching the forests to find any dreams who got stranded in them and bring them to the tree.

Lillia is best known for her very shy and timid personality. She regularly spends her time away from others residing in the forests of Ionia. While she is fascinated by humans, she still hides from them in the forests due to her timidity.

However, in spite of her shyness, Lillia is capable of feats of courage. As her venturing out into the forest in the first place and outside of her own garden is already a feat for her due to her stepping far out of her comfort zone. She also regularly faces off against opponents as a champion, even though she often still can't bring herself to look them in the eye most of the time and apologizes while attacking them. 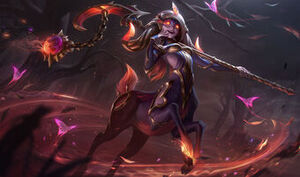 Lillia in her Nightbringer Skin. 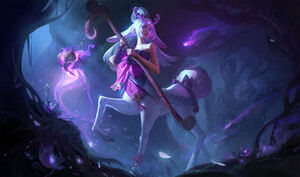