Lily Chilman is the Yellow Jungle Fury Ranger and only girl in the team. She is also Theo Martin's love interest.

Lily was a student at the Pai Zhuq Academy along with her friend, Theo Martin. They along with Jarrod were supposed the chosen 3 protectors to guard Dai Shi. However their sensei, Master Mao, upon witnessing Jarrod bullying a younger student and saw a new student, Casey Rhodes, stand up to him exiled Jarrod and choose Casey in his place. The Three were taken to a place called the Forbidden Room, where Jarrod came in and attacked Master Mao, thereby resealing Dai Shi, who killed Mao. Before he died, however, Master Mao told to go the city of Ocean Bluff, where they would find their new master. They met their new master, RJ, at Jungle Karma Pizza. RJ give them solar morphers which allow them to become Power Rangers. Lily, using her cheetah animal spirit, became the yellow Cheetah Ranger. 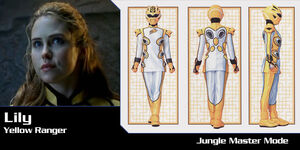 Retrieved from "https://hero.fandom.com/wiki/Lily_Chilman?oldid=1665755"
Community content is available under CC-BY-SA unless otherwise noted.