Order of the Phoenix Member

She is portrayed by Geraldine Somerville as an adult, Susie Shinner as a teenager, and Ellie Darcey-Alden as a child.

Lily was born on January 30, 1960 in the English town of Cokeworth to Muggles Mr. and Mrs. Evans, she was the younger sister of Petunia.

As a child, she discovered that she had magic powers, which caused her sister to see her as a freak whilst her parents expressed joy.

Lily didn't have any friends and became lonely, until she met a child named Severus, who was the son of her neighbors.

He told her that the reason she had magical powers was because that she was a witch and that he was a wizard. The two quickly bonded and were able to come to understand each other and their special powers. Severus even fell in love with Lily.

In 1971, an eleven-year-old Lily received a telegram from the Hogwart's School of Witchcraft and Wizardry saying that she had been accepted into the school, much to her parents' happiness and her sister's jealousy.

At Hogwarts, Lily was sorted into the Gryffindor House while Severus was put into the Slytherin House. During the school years, Lily defended Severus against fellow Gryffindor named James Potter and his bully friends Sirius Black, Remus Lupin and Peter Pettigrew who picked on and hexed Severus and other students. James started to develop romantic feelings for Lily and wanted to be with her, but Lily refused. Severus then joined the Death Eaters much to Lily's horror and ended her friendship with him after he accidentally called her a Mudblood (a offensive term for Muggle-Born witches and wizards). As the years went by, James started to better himself and stopped hexing the students which caused Lily to accept him and the two began a relationship.

After graduation in 1978, Lily and James were married and on July 31, 1980, she gave birth to their first and only son, Harry James Potter.

One year later on Halloween night, Lord Voldemort (who believed by a prophecy that Harry would destroy him) came to the Potter home which Peter, (who was serving as the family's secret keeper to keep their location secret to Voldemort) betrayed the Potters to Voldemort (whom Peter was secretly in league with). With her husband dead, Lily did what she could to protect her infant son and sacrificed herself by getting hit with the Killing Curse which killed her instantly. Before her death, she told her son that she and his father loved him very much. Because of Lily's sacrifice, Voldemort was unable to kill Harry as Lily's love protected him.

Lily was described as a very powerful witch. She was so brave that she gave up her entire life to protect her son and was not afraid to die for his sake. The love for her son was so powerful that after she died and Voldemort attempted to kill Harry, the Killing Curse backfired and destroyed Voldemort's body and caused Harry to receive a scar in a shape of a lightning bolt and survived. Because of the scar, Harry gained a strong bond with Voldemort and even gained some of his dark powers (giving him the ability to talk to snakes and see into Voldemort's mind) until Harry lost those powers when Voldemort unknowingly destroyed the piece of his soul that was inside of Harry. Lily was known to have the most beautiful green eyes, and since Harry had inherited his mother's eyes, Lily's past teachers, friends, and even Severus mentioned that Harry's eyes show that a part of Lily is still alive in Harry. 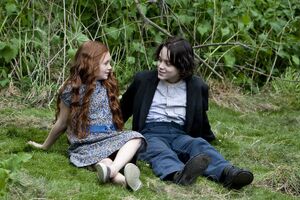 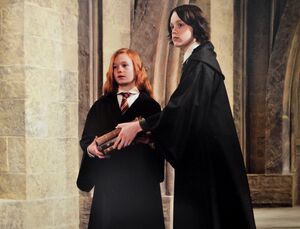 Lily and Severus at school. 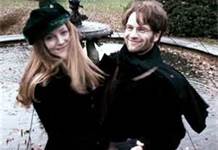