Worker in the bath house and spa

Get train tickets and leave the bathhouse.

Strong-Willed Protector
Lin (also called Rin) is the tritagonist in the 2001 animated Studio Ghibli film, Spirited Away. She is a servant in Yubaba's bathhouse, and a transformed spirit of a Byakko, a white tiger (possibly fox ) that brings people happiness. She becomes Chihiro's caretaker when she is assigned to her as her assistant, and helps her several times during the course of the film.

She is voiced in Japanese by Yumi Tamai and in English by Susan Egan, who also voiced Megara in Disney's Hercules.

Lin is very strong-hearted, stubborn and occasionally bossy. Although she has a good heart and cares for Chihiro, she is quick to defense, and her attitude and words are often sarcastic. She is also very protective, as she hides Chihiro when sneaking to the top floor to see Yubaba, and also comforts Chihiro while attempting to cure the River Spirit by telling Chihiro she won't let him hurt her.

Lin has brown eyes, straight brown hair with short bangs parted in the middle with long side strands of hair on both sides of her head. The length of her hair goes past her waist, and the end is tied with a pink ribbon. She wears a standard salmon colored jinbei uniform with a yellow undershirt and blue apron that most of the female staff wear.

Lin is first seen coming through a small door in the boiler room of the bathhouse with a basket full of small, star-shaped treats (konpēito) to feed Kamaji's soot workers. She soon spots Chihiro and yells at her, stating she is the human everyone is looking for. Kamaji then lies, telling her Chihiro is his granddaughter, and asks Lin if she can take her to see Yubaba to get a job. Lin immediately denies this, saying she is not going to risk her life. However, Kamaji then bribes her with a roasted newt which she hesitantly swipes it from his hand and takes Chihiro with her, getting angry at her lack of manners and calls her a dope.

Lin and Chihiro walk down the corridor and make their way on the first elevator; Chihiro sticks her face near the wall as they are ascending, and Lin coldly asks her if she wants to lose her nose. Once they are at the top, Lin and Chihiro quickly make their way to the next elevator, trying not to be seen be the other customers and workers. When they are going up, Lin reassuringly states that they are halfway there and for her to stay close. When they reach the top, the door opens to the Radish Spirit who Lin greets with a fake smile and tells him that the elevator does not go any higher, and that he will have to use another one. Lin and Chihiro step out and make their way to the second elevator, trying to avoid the Radish Spirit slowly following behind. Lin tells Chihiro not to look at him, and they eventually make their way to the second elevator where they stand waiting. Once the door opens, several spirit customers and a frog worker exit the elevator and Chihiro and the Radish Spirit get in; the worker then sniffs the air and turns to Lin, telling her she smells just like a human. Lin then pulls out the roasted newt and asks him if that is what he smelled and teases him with it to stall time, telling Chihiro to pull the lever to go upward. Once the elevator closes, Lin shoves the roasted newt into her mouth, leaving the frog worker disappointed.

After Yubaba finally agrees to put Chihiro to work under the name of Sen, Haku assigns her to Lin, stating that she did request an assistant. Although Lin seems annoyed by the supposed burden, once she and Chihiro are alone, she states joyfully that she cannot believe Chihiro pulled it off and that she was really worried. She then tells Chihiro to keep on her toes and to ask her if she needs anything. She then finds Chihiro some new clothing. During so, Chihiro asks about Haku, and Lin states that he is the henchman of Yubaba, and not to trust him. Chihiro then begins to feel sick and kneels over, and Lin bends down and tenderly rubs her back.

Lin is seen the next day with Chihiro, and upon seeing how new Chihiro is to working in the bathhouse, asks her if she has ever worked a day in her life. A frog worker then assigns Lin and Chihiro to wash the "big tub," much to her dismay. When they arrive, Lin comments that they have not cleaned it in months. After they have cleaned it some, they are notified that a customer is on its way, and Lin angrily states that they are clearly being harassed. She then asks Chihiro to get an herbal soap token from the Foreman so they can soak the tub. When she comes back with the token, Lin shows her how to work the water in the tub and heads off to get them some breakfast. Lin is then seen as the polluted River Spirit crosses in front of her, causing the bowls of rice she is holding to rot.

When Chihiro has the River Spirit in the bath and the water is flowing, Lin appears and tells Chihiro to stay where she is, and that she will not let the spirit hurt her. Chihiro tells her she thinks the spirit has a thorn in his side, and Lin rushes up to help her and ties a rope around the object. She and the rest of the staff then work together to pull the objects out of the spirit, thereby cleaning the river of its pollutants. 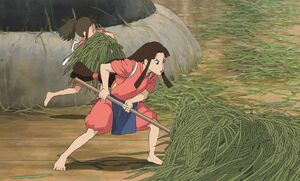 Lin working along with Chihiro 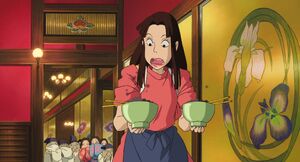 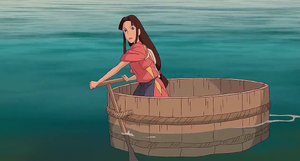