Murder on the Orient Express

Seek revenge and righteous justice for her family by killing Cassetti

Linda Arden, also known as Caroline Hubbard, is one of the major protagonists in Agatha Christie's 1934 Hercule Poirot novel, Murder on the Orient Express and its adaptation, and arguably its (false) main antagonist due to being the lead culprit of Lanfranco Cassetti's murder.

On board the train, she masquerades as a woman named Caroline Martha Hubbard. In the 1974 movie, she uses the alias Harriet Belinda Hubbard.

She has been portrayed on screen by various actresses, including the late Lauren Bacall in 1974, Meredith Baxter in 2001, Barbara Hershey in 2010, and Michelle Pfeiffer in 2017.

Linda Arden, being referred to by this stage name, is the mother of Countess Andrenyi and the late Sonia Armstrong, as well as the grandmother of the late Daisy Armstrong. She is also the main prepertrator to murder Samuel Ratchett a.k.a Lanfranco Cassetti in order to avenge her dead family and find righteousness for Cassetti's victims.

During the journey Linda Arden travelled as Mrs. Hubbard, and was ostensibly travelling back to America after visiting her daughter and son-in-law who were on the staff of a big American college in Smyrna, Turkey. She occupied compartment 3 which had a connecting door with Ratchett's compartment. The unexpected presence of Poirot on the train required the group deivse various misdirections for his benefit. Linda, in particular, created a commotion around 1.15 a.m. insisting that there was someone in her compartment. Some time later she joined the other members of the group to stab Ratchett in turn.

After the murder, Linda also produced a sham Oriental dagger and a train conductor's uniform button as possible clues. She said that she found the dagger in her sponge bag which had been hanging on the handle of the connecting door with Ratchett's compartment.

Poirot in investigating the killing, subsequently surmised Mrs. Hubbard's true identity as the mother of Sonia Armstrong and grandmother of Daisy. During the denouement, Linda offered to take the blame for everyone else, saying that she "would have stabbed that man twelve times willingly." It was, she pleaded, unnecessary to bring all the others into it.

Linda Arden was eventually spared alongside other killers due to Poirot being sympathized with their motives.

In the 1974 film, Linda was shown to be the first to stab Ratchett/Cassetti, saying it is for her daughter and graddaughter. She then passes the dagger to Colonel Arbuthnot.

In the 2001 film, Linda's role remained mostly faithful to the novel. At the end of the show, Poirot (in a voiceover) said that Caroline Hubbard went on to perform in Salt Lake City at a dinner theatre production of Agatha Christie's The Mousetrap.

In the 2010 television film adaptation from Agatha Christie's Poirot, Linda is shown to be the penultimate person who stabbed Samuel Ratchett / Lanfranco Cassetti, before she gave the dagger to Princess Dragomiroff to finish the final blow.

In the 2017 film version, Mrs. Hubbard/Linda Arden was presented as an even more struggling and conflicted character, who was shown to have suffered from emotional stress on the terms of killing Cassetti.

This part was particularly explored within the climax, when she pledged Poirot to arrest her alone and spare all the others. Poirot gave her Hardman's revolver, which he had confiscated, urging her to shoot him if she and the others wanted to avoid arrest and let everything gone unnoticed, since he could not lie to the police.

However, Linda Arden refused to kill Poirot and stated she had already died with Daisy. She attempted to shoot herself instead, much to everyone else's horror, but turned out it was an empty pistol, Poirot wanted to see how the suspects would react and her reaction confirms none of them are truly killers at heart. Realizing this, Linda broke down in tears. Alongside the other killers, Linda was spared by Poirot and gone free. 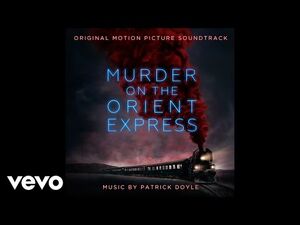 Michelle Pfeiffer - Never Forget (From "Murder on the Orient Express" Soundtrack)
Ending theme of the 2017 film adaptation, sung by Michelle Pfeiffer who portrayed Mrs. Hubbard/Linda Arden
Add a photo to this gallery

Retrieved from "https://hero.fandom.com/wiki/Linda_Arden?oldid=2226406"
Community content is available under CC-BY-SA unless otherwise noted.