Can drive a snowmobile, motorbike, bulldozer and parade float

Playing with her best friend, Blu

Spending time with Tulio and Fernando

Save Blu and Jewel from smugglers

Linda Gunderson-Monteiro (simply known as Linda) is one of the two secondary tritagonists (the other one being Tulio) of Rio and a major character in Rio 2. She is the owner and best friend of Blu from Moose Lake, Minnesota. She is the owner of Blu Macaw Books, her bookstore one floor above which her home is.

She is voiced by Leslie Mann (who portrayed Ursula Stanhope in George of the Jungle) as an adult and Sofia Scarpa Saldanha (the daughter of director Carlos Saldanha) as a child.

Linda is first seen as a little girl outside in the snow, opening a crate to find a baby blue macaw in there. She takes him in and takes care of him, naming him "Blu". As they both grow up together, she throws him birthday parties, takes him to spelling bees (and won one at the age of 14) and even to her high school promenade. And finally, she is then working in a bookstore. During the routine, Linda is woken up by an alarm (which Blu is imitating), brushes her teeth, gargles, eats her breakfast, gets Blu to take his vitamins, and then goes downstairs to work. Then Blu logs her on and opens the shop. While she is selling books, she gives a plate of cookies and hot chocolate to Blu (just how he likes it: with miniature marshmallows)* while talking to her mother on the phone about whether she should visit her or stay and take care of Blu. She is then visited by Tulio Monteiro, Doctor of Ornithology, an aviary intern, who has been looking for Blu. At first, she is against his idea: to bring Blu to Rio de Janeiro (this is in order to meet with the last female blue macaw and save their species), but thinks about it after he tells him there could be no more chances, and not doing this could end their species. She reluctantly takes Blu to Rio, assuring him that she has never broken a promise to him, and that she is also scared to do it, but wouldn't make him do it if it weren't right.

She isn't very familiar with what it is like in Rio (so far except for the fact that you have to have suntan lotion on, and she applies it to Blu's beak). She watches performers for the world's biggest party called Carnival cross the street, and enters the aviary. There, when Blu is put in, Linda watches through the monitors. When Blu and Jewel (who he meets) fights when he assumes they were going to kiss, but she wants to escape, Tulio turns on Lionel Richie's song "Say You, Say Me" (which won the Academy Award for Best Original Song in 1986), Jewel fights with Blu physically, causing both Linda and Tulio to assume the song got them to mate quickly. She is reluctant to leave Blu by himself (though he is with Jewel), but Tulio tells her that he has Jewel, and that Sylvio, the best guard in the business, will keep an eye on them all night.

While Linda and Tulio are eating out together, the latter gets a phone call from Sylvio who tells him that Blu and Jewel have been abducted (because Nigel had attacked the guard in order to let the orphan boy Fernando in to capture them). Linda then blames Tulio for this, and they look for him, using missing posters.

The next morning, as Linda and Tulio are sleeping, Fernando, serving as a double agent (working for the poachers for money, but having concern for the birds, too), takes Linda and Tulio to where they "are" (unaware that they had escaped). Though Tulio tells Linda they cannot trust Fernando because they don't know him, she tells him she has no choice. On the way, as the streets are closing, and they are in an area of favelas (Brazilian shanty towns or slums), they cannot get Tulio's jeep through, so Fernando trades in the jeep for a motorcycle, which he drives recklessly.

Once they get to the poachers' hideout, much to Fernando's disappointment, Blu and Jewel are gone, and Linda is shocked to find out she trusted the one who took the birds away. When Tulio reveals that he can't drive a motorcycle, Linda takes over and as she is able to drive it, she takes it as "just like riding a snow mobile".

That night, during Carnival, Tulio and Linda sneak in and disguise as performers in blue macaw costumes (presumably resembling Blu and Jewel, respectively), and Linda is pushed inside a float, and begs to be let out, only to find out that the "floor" elevates up. She says her catchphrase "Cheese and sprinkles" (That is where Blu got it). She misunderstands her "fellow" performers (actual performers) and the director when they tell her "Bola". She is shocked when she finds out from Tulio that it means she has to shake her "tushy". She later sees Blu riding on a bulldog named Luiz (as he is setting off to rescue Jewel from the smugglers' float). Then, Linda steals the float when she finds out that the smugglers and the cockatoo named Nigel have taken Blu (subsequently) (as Fernando was leaving rags behind as a trail to lead them), but they miss when the smugglers take off in their plane.

However, later, when Fernando points something out, Linda sees that Blu is finally flying (in order to have saved an injured Jewel from falling to her death). As soon as Jewel's wing is healed by Tulio, he, Linda and Fernando organize a sanctuary to protect the jungle from smugglers and she then bids Blu a final good-bye.

In the credits, she and Tulio share a hang glider and fly with it with Blu, Jewel, their chicks, and their friends Nico and Pedro following, and neither are aware that Luiz is hang gliding, too. In snapshots, it reveals that the sanctuary workers have become a family and that they opened a Brazilian branch of Linda's bookstore "Blu Macaw Books".

Now happily married to Tulio, Linda and her husband venture into the Amazon for an expedition, and to re-release a Marbled Wood Quail into the wild. Linda paddles the boat, exhausted as Tulio is filming the surroundings and not paddling. Linda tries to coax the shy Wood Quail out of her cage, which eventually works (aided by Tulio's attempts at bird talk, which seem to frighten the quail), and the quail reunites with it's fellows. The quail then begins hopping and chirping, which Linda thinks is a warning. Tulio dismisses this, but it is later proved true as Linda spots rapids up ahead. The boat makes a wild journey down the rapids and then over a waterfall.

After surviving the fall, Tulio searches for Linda, and the two reunite with a hug. They are distracted by a squawk, and a fast-flying blue bird suddenly dives past them, destroying the camera and losing one of it's feathers. Tulio identifies it as a Spix's macaw's feather, to his and Linda's joy. Later, Linda and Tulio are on the news, which is seen by Blu, Jewel, and their kids, Bia, Carla, and Tiago. Jewel decides to take the family to the Amazon, to help Linda and Tulio find the Spix's macaws.

Blu and the family arrive in the Amazon, unknowingly close to Linda and Tulio. Linda is attempting to pin down the position of the Spix's macaws, believing them to be close to the Brazil nut trees and the waterfalls. Blu is suddenly grabbed by a bird, and his squawks capture Linda and Tulio's attention, who frantically head in the direction of the sound. Linda worries that it sounded like Blu, but Tulio doubts this, believing Blu to be in Rio. Linda wakes up later that night, thinking that somebody is outside, but sees that it is a tamarin.

Blu mentions Linda to Eduardo, who is angry when he finds out that Blu was once a pet. Blu protests that Linda raised him and is family, but Eduardo is still angry. Blu manages to find Linda and Tulio's coordinates on his GPS, stating to Jewel that they are really close. Jewel is hesitant at the thought of the tribe being discovered, and says that they are better off alone.

Linda and Tulio discover loggers cutting down some trees. Tulio tries to stop her, but Linda confronts them angrily. Tulio drags Linda away, but the two then realize that it is a trap (the loggers have been planning to kidnap them in order to stop their logging activity being disturbed). Linda flees when Tulio tells her to, running into the jungle as she is pursued by the loggers. Linda manages to escape, but is eventually caught and tied to a tree with Tulio.

Blu goes to Linda and Tulio's campsite to say goodbye, but then realizes that something is wrong. He sees that the site has been attacked, and becomes frantic. Roberto confronts Blu, but a bulldozer runs over the campsite. Blu sends Roberto to warn the tribe, then goes to find Linda and Tulio. Later, still tied to the tree, Linda and Tulio maneuver into a position where they can hold hands. Tulio apologises for getting Linda into their situation, but Linda responds by telling him there's no she'd rather be than with him. Linda then sees Blu. She makes bird sounds to catch his attention, and Blu frees them from the tree. Linda and Tulio try to stop the loggers from cutting down some trees, blocking the way. Linda and Tulio are then delighted and shocked to see hundreds of Spix's macaws in the trees behind them.

During the ensuing melee, a logger in a tree harvester attempts to run over Eduardo, but Linda crashes into it with a bulldozer, knocking it over after a brief struggle. Linda does a victory dance afterwards, joyful. Afterwards, Linda and Tulio go back on the news with Blu, announcing that the Spix's macaw tribe's residence has become a sanctuary, safe from loggers and other dangers.

Linda is initially very bookish and quiet, and very devoted and protective of Blu. When she discovers Blu has been kidnapped, she angrily turns on Tulio, blaming him for everything. She seems to be quite trusting; When Fernando tells her that he knows where Blu is, she instantly believes him. During the search, Linda shows herself capable of daring feats, such as driving a motorcycle (claiming it is "just like driving a snowmobile") and hijacking a Carnival float, later attempting to ram the smugglers' plane with it.

When she first met Tulio, Linda seemed nervous by him saying he would be with her during the trip to Rio. When they had dinner together, she was flattered by his complimenting her eyes. When they donned blue macaw costumes in order to sneak into Carnival, they became even more attracted to each other. During the film's final scene, Linda and Tulio seem to have become an actual couple, suggested by their holding hands.

Young Linda finds Baby Blu and Promises to take care of him.

Linda and Tulio in costume gazing at each other.

Linda & Tulio in their costumes. 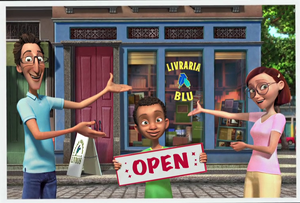 A photo of Linda and Tulio's wedding.

Linda and Tulio realizing there are other Spixes nearby. 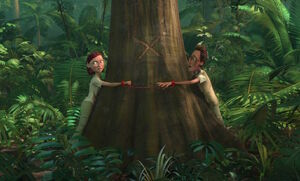 Linda and Tulio tied to a marked tree by the loggers.

Retrieved from "https://hero.fandom.com/wiki/Linda_Gunderson?oldid=1787305"
Community content is available under CC-BY-SA unless otherwise noted.