God Eater, Captain of the 1st Unit in the Fenrir Far East Branch

Lindow Amamiya is one of the main protagonists in the video game God Eater. He is the captain of the 1st Unit in the Far East Branch of Fenrir. Underneath his calm and joking exterior, he's serious when it comes to work. His right arm became part Aragami during the games' events, but he still kept his mind and offers his guidance as a former commanding officer.

He is voiced by Hiroaki Hirata in the Japanese version and Kyle Hebert in the English version.

He holds a serious secret and was reported MIA (Missing In Action) during the Moon in the Welkin mission after being attacked by an Aragami. However, Lindow survived the mission, but a Dyaus Pita appeared afterwards and he was forced to fight it. During the fight, he lost his God Eater armlet, but Shio appeared and saved him. While missing, his Aragami cells began to take over his body as his armlet was no longer there to control them with Bias Factor injections. They managed to take over his right arm, causing him incredible pain and affecting his behavior. Whilst in this state, Shio helped him control the pain and slow down the transformation. Eventually, he mutated into a Corrosive Hannibal. Notably, he kept his previous personality, saving Tatsumi's group before his Aragami half took over and turned on them. The Protagonist then saves them and experiences a resonance before the Hannibal departs. The Protagonist and Ren find and fight him in this state, on Aegis Island, and free him from the Hannibal. After a trip through Lindow's mind, the two eventually reach Lindow's true self, and he and the Protagonist fight the Corrosive Hannibal to free him from the mutation. Presently he is still a part of the Fenrir Far East Branch, although still with his mutated right arm (which has stopped taking him over, thanks to the sacrifice of Ren (who was actually his God Arc)).

Lindow is now a member of Cradle, alongside Soma, Alisa, and the original Protagonist. He has a son named Ren with Sakuya.

Lindow is quick to joke around, but shows distinguished judgement and acting power in battle. Regardless of the situation, he prioritizes the survival of his team members before his own. This is shown best by the failed Moon in the Welkin mission, where, in spite of him not having a real choice at the time, he continues to fight the Prithivi Mata to buy time for the rest of the team.

Lindow makes an appearance in Project X Zone. He is a support character for any of the playable characters

A long-standing God Eater with the Far East Branch. Aloof and a bit rough in his actions, but extremely capable, he takes good care of his subordinates and is well-liked. His attempts to obtain information on the secret "Ark Project" led to Johannes targeting him for assassination. Although he barely managed to survive the attempt on his life, his right arm was taken over, causing his entire body to become an Aragami and preventing him from returning to base. As his consciousness faded, the search party found him, saving his life and bringing him back to the unit. He is currently working on training new God Eaters. 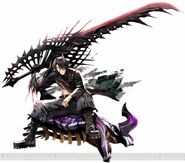 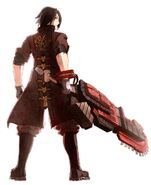 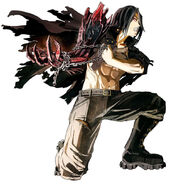 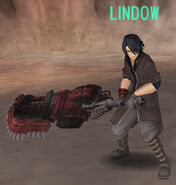 Retrieved from "https://hero.fandom.com/wiki/Lindow_Amamiya?oldid=1696081"
Community content is available under CC-BY-SA unless otherwise noted.