Going to amusement parks.
Hanging out with Panda and Miharu.

Stop Jin Kazama for wanting to kill Heihachi and Kazuya.

Ling Xiaoyu (Chinese: 凌曉雨) is a supportive heroine from the Tekken series. She was introduced in Tekken 3 and has returned in every subsequent release.

Ling Xiaoyu, born and raised in China, is a student at Mishima High School in Japan. Ling Xiaoyu is also a schoolmate of Jin Kazama and Miharu Hirano. In Tekken 4, Xiaoyu wished to be reunited with Jin.

Xiaoyu's fighting style was brought on with some influence from her distant relative, Wang Jinrei. Mastering her fighting style in real life would require a constant flexibility (Ex. Art of the Phoenix, Phoenix Talon, Mistrust, Flapping Wings, Front/Back Layout) and maneuvering.

In the Japanese version, she was voiced by Yumi Tōma until Maaya Sakamoto took over the role in Tekken: Blood Vengeance, although the former briefly reprised the role in Tekken 3D: Prime Edition and Street Fighter X Tekken.

In English, she is voiced by Carrie Keranen in Tekken: Blood Vengeance and Carrie Savage since Street Fighter X Tekken.

Xiaoyu was born and raised in China. She was tutored in martial arts from a young age by her relative Wang Jinrei. He believed that if she were more serious, she could become great. While vacationing in Hong Kong with her family, she noticed a Mishima Zaibatsu yacht.

Knowing that the Mishima Zaibatsu was rich and powerful, she decided to seek out Heihachi Mishima and make her dream of owning an amusement park a reality. Abandoning her family, Xiaoyu stowed away on the yacht until the ship’s security soon discovered her. By the time Heihachi arrived on the scene, all of his personal security force had been beaten into unconsciousness by Xiaoyu. Heihachi found Xiaoyu and she threatened to beat him up. Amused by her juvenile antics, Heihachi promised to build her theme park if she won his tournament.

She enrolled at the Mishima Polytechnical School, where she first met Jin Kazama, becoming good friends with him. Bringing along her old school's trained Panda, Heihachi taught Panda to fight, so that Xiaoyu would have a bodyguard. Because of this, Xiaoyu sees Heihachi as something of a grandfather.

Ling Xiaoyu is a cheerful girl whose dream is to build an amusement park in China. After suggestions by her teacher and distant relative Wang Jinrei, she visits Heihachi Mishima and begs him to build her park.

Amused at the girl and surprised at her strength (she thrashed some of his guards before), he makes an offer to her: win the 3rd tournament and he'll comply. Due to this, she ends up moving to Japan and attending Heihachi's private school, where she becomes a close friend of Jin.

Ever since then, she's been trying to help/save/resolve Jin and the Mishimas' dysfunctional relationships. None of them are actually bothered to even notice her attempts, though; it's a wonder Jin isn't tired of talking her down.

Xiaoyu entered the tournament in hopes of achieving her life long dream of owning her own Amusement Park.

Still living, studying and training as a ward of the Mishima Zaibatsu, Xiaoyu lacked any particular goals, and grew tired of her everyday routines. However, one day, she received an anonymous e-mail that warned her of Heihachi’s evil intentions and the danger to her life. Ling replied to the e-mail, but she did not receive any further messages from the anonymous individual.

Ling’s intuition told her that Jin, who had been missing since the last Tournament, could have sent the message. She believed the message and started to suspect Heihachi and the Mishima Zaibatsu. Upon hearing the announcement of the next Tournament, Ling made the decision to enter, hoping to be reunited with Jin and to unveil the truth behind Heihachi and the Mishima Zaibatsu.

In the previous tournament, Ling was saved from the evil plans of Heihachi by Yoshimitsu, who taught her the history of the Mishima family. Ling began to believe that the misfortune surrounding the Mishimas started with Heihachi's upbringing of Kazuya.

When Ling heard that Heihachi died, Xiaoyu cried and wished she could turn back time. Later, Xiaoyu met a brilliant scientist who claimed that he could make a time machine as long as he gets the funding for development. Under the condition that she would be first to use the machine, Ling accepted her invitation to the King of Iron Fist Tournament 5.

Xiaoyu was relieved to hear that Heihachi had not truly died. However, as the new head of the Mishima Zaibatsu, Jin Kazama aimed to take Heihachi’s life. Xiaoyu was going to try and stop Jin herself, but the Zaibatsu pushed towards militarization, making it difficult to approach Jin.

The Mishima Zaibatsu’s declaration of war drew hostility from around the globe. When the King of Iron Fist Tournament 6 was announced, Ling Xiaoyu entered in the hope that she could save Jin’s soul from evil.

Xiaoyu makes an appearance in Project X Zone. She is a playable character with her partner Jin Kazama.

She also is a playable character once again in the sequel, Project X Zone 2, her partner this time is Chun-Li, whose partner was previously Morrigan Aensland in the original.

A student at Mishima High School, along with Jin. In order to achieve her dream of creating a theme park, she originally made contact with the then-head of the Mishima Zaibatsu, Heihachi. She then came to learn of the deep antagonism between the members of the Mishima family. After seeing Jin suffering as a result, she was determined to try and help him out, and followed after him when he set off on his own. Although she does like to stick her nose into others' affairs, she is kind at heart and honestly wishes for the resolution of the conflicts within the Mishima family. She has a pet panda with whom she is very close with. She fights using a variety of martial art, attacking from a mixture of different stances.

Ling Xiaoyu appears as one of the Kazuya's DLC spirits, she is a advanced-ranked primary shield-type spirit that increases the user's speed. Her spirit battle is a stamina battle against a Mii Brawler with Ashley hair and orange fighter uniform and a Mii Gunner with a cat hat and K.K. Slider outfit on the battlefield form of the New Pork City stage, only the Mii Brawler need to be defeated to win. 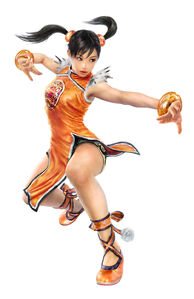 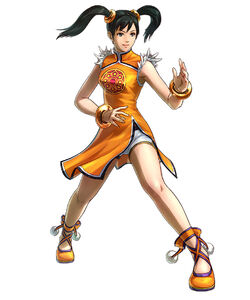 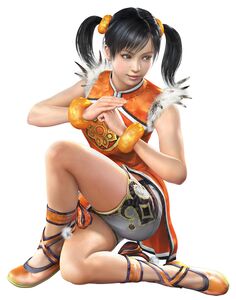 Her artwork for Tekken Tag Tournament 2. 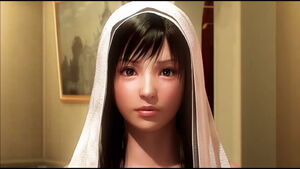 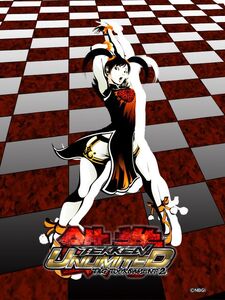 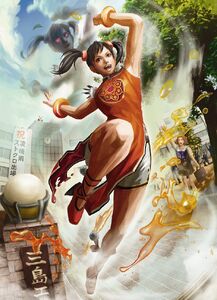 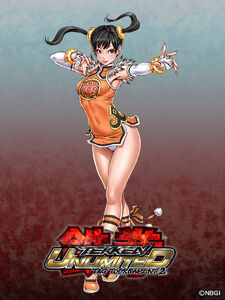 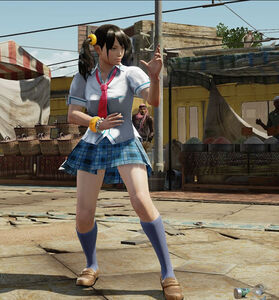 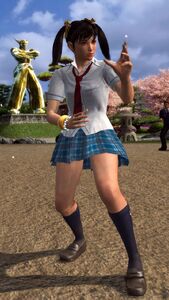 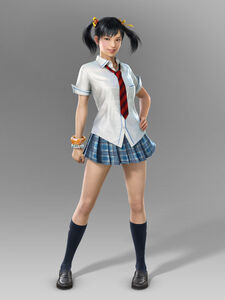