Defeat Xehanort.
Save Aqua and Ventus from their fates (both indirectly succeeded).

The Lingering Will is the lost mind of Terra after he defeats Xehanort at the end of his campaign in Kingdom Hearts Birth by Sleep.

In the end, the Lingering Will emerges victorious, knocking Terra-Xehanort unconscious. The armored figure then thrusts its Keyblade into the ground, kneeling down. Soon after, Terra-Xehanort is consumed by an immense sphere of light, the result of Aqua and Ventus destroying the χ-blade following Vanitas's own destruction. The clouds overhead then cover Kingdom Hearts, disappearing above, leaving the Lingering Will to remain alone in the Keyblade Graveyard, silently promising to Aqua and Ven that someday, it will set things right.

Eleven years later, a portal to the Badlands in the Keyblade Graveyard mysteriously appears in Disney Castle. Sora, Donald, and Goofy proceed to enter the portal and find the Lingering Will in the same position as it had been left in. It mentions Aqua, Ventus, and the Keyblade. It then mistakes Sora as "the one he had chosen"; realizing its mistake, it asks why he isn't "him".

Then it wonders if Sora is Xehanort, slowly pronouncing the latter's name, before finally rising up as it did once before to attack him. Sora fights back and wins the battle, and the Lingering Will merely kneels down again after this. Sora can return for rematches against the Will, which agrees to fight, but it is unknown if the subsequent rematches are canon.

The Lingering Will shows up at the Keyblade Graveyard to save the Guardians of Light when they are about to be struck down by Terra-Xehanort during the Second Keyblade War, and successfully fights him off.

As the Lingering Will is truly an inanimate object, it cannot feel or possess a personality of its own. Since it was brought to life by Terra's discarded thoughts and emotions, however, it is able to "feel" a strong hatred towards Xehanort, a close connection and devotion to Aqua and Ventus, and a familiarity with Riku and Sora. 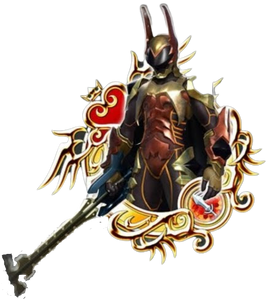