The Hero of Time

The Legend of Zelda: Ocarina of Time Mangaverse

Defeat and seal Ganondorf in the forbidden realm and end Ganondorf's tyranny. Find the Four Giants and stop the possessed Skull Kid from destroying all traces of life on Termina. Control his transformations to defeat Majora's minions. Defeat and kill Majora for trying to start the doomsday on Termina (all succeeded).

He is based on his video game version of himself with the character of the same name.

When Link was a baby, he escaped along with his injured mother from the Hyrule Civil War when this latter is slowly dying from wounds during the Civil War. He was then adopted by The Great Deku Tree who raises him as his son after his parents died during the war. After becoming a child, he is raised as a Kokiri until he meets a fairy named Navi who was sent by his parental guardian. Link manages to find a sword and an shield after being helped by Navi. After receiving the Kokiri Emerald, Link learns the story of an certain Ganondorf who put a curse on his parental guardian the Great Deku Tree.

Before dying, The Great Deku Tree tells Link to go to see Princess Zelda before passing away in the process. Link then leaves the forest and receives the Fairy Ocarina from his friend Saria. He went on his hometown and manages to wake up Talon with Cucco who was hatched from egg. He manages to avoid the guards who attempted to mistake him for intruder. But Link avoids it. He later meets Zelda and discovers that Ganondorf is a traitor who saw Link and Zelda. Zelda gives Link an letter and this latter receives the visit of Zelda's nanny named Impa who teaches him the Zelda Lullaby. Link goes to the Lon Lon Ranch and learns Epona's song from Malon and he and Epona become best friends, Link then returns to the lost woods and learns Saria's Song from her. Link goes to the Graveyard and learns the Sun's Song. He went to Kakariko Village and gives the solder Zelda's letter to go to the Goron City, He meets Darunia and teaches him the Saria's Song to make him happy, this latter gives Link the Goron Bracelet to lift up the Flower Bombs.

Link goes to the Dodongo Cavern and manages to find Bomb Bags and fights feral creatures. He encounters King Dodongo and vanquishes him in the process with his bombs and his Kokiri Sword. He receives the Goron Ruby from Darunia who describes him as Sworn Brother

Link receives Zora's Scale and finds Princess Ruto's letter to give it to King Zora. Link manages to use the fish to go inside of Jabbu-Jabbu. Link meets Ruto and team up to stop an electrical boss monster, after killing him, he receives the Zora Sapphire in the process. After Zelda and Impa escaping the castle with their pet horse, Link encounters his archenemy Ganondorf who attacks him. But Link learns the Song of Time after receiving an vision of Princess Zelda while receiving the Ocarina of Time. When he went in the castle, Link encounters an dying soldier who manages to convince him to go to the Temple of Time before succombing to his wounds in the process. Link plots to avenge the solder by getting the Master Sword with the Ocarina of Time.

Seven Years later, Link wakes up on the Chamber of Sages and finds out that he is turned into an adult and his voice has changed to a deep voice. After receiving the Light Medaillon, Link is sent to the Temple of Time and meets the mysterious man named Sheik. Link then uses the Ocarina of Time to contact Saria. Link went to Kakariko Village to learns the Song of Storm. Link receives the Hookshot from Dampe who is a ghost and went to the Forest Temple to get Bow and Arrows and kills Phantom Ganon. He was teleported to the Chamber of Sages and receives the visit of Saria who gives him the forest medaillon. He was teleported to the Kokiri Forest and meets Deku Tree Sprout. Link went on the Temple of Time and learns a song for the Temple of Time. Link drops the Master Sword and turns into a child to get the Lens of Truth. Link then returns to the Temple of Time to become an grown-up again with the Master Sword. Link went on Goron City and receives the Goron Tunic. He went of the Death Mountain Crafter and learns the Boledo of Fire. Link went on the Fire Temple and gets an Magneton Hammer by killing hostile monsters. Link manages to kill Volvagia with his hammer and his sword and was teleported to the Chamber of Sages when he receives the visit of Darunia who gives him the fire medaillon. Link went to the Zora Fountain and finds out that King Zora has frozen. Link manages to get Iron Boots, learns the song of Water Temple and uses the Blue Fire to unfreeze King Zora. King Zora then gives Link an Zora Tunic. In Kakariko Village, Link and Epona killed Dark Link and Dark Epona who was escaped from the Wishing Well. Link then went of the Water Temple and kills Barricade with his Longshot and its sword, causing the monster to blow into bits, restoring the water in Lake Hylia back to normal.

Link went Gerudo Valley and receives an card to meets the Gerudos after defeating the thieves repair. Link meets the Phatom Guide who guides him to the Desert Colossus. He learns a song for the Spirit Temple and teleports back to the Temple of Time to become an child once again. Link goes to the Spirit Temple and meets Nabooru who convinces him to find the Silver Gauntlet before she gets kidnapped and hypnotized by Koume and Kotake in the process. Link teleports back to the Temple of Time to become an grown-up to rescue Nabooru and free her from Koume and Kotake's influences. Link manages to kill Twinrova and disband her back to Koume and Kotake with his sword and his Mirror Shield in the process. Link went on the Kakariko Village and discovers that Bongo-Bongo breaks free and escapes from the Well. Link manages to find the fast boots and kills Bongo-Bongo with the help of his weapon.

Link went of the Temple of Time and realizes that Sheik who helped him to find the Sages is actually Zelda who gives her the Light Arrows before getting captured by Ganondorf. Link went to Ganon's Castle and receives the Gold Gauntlet and manages to defeat Ganondorf. Link and Zelda combine the powers to destroy the mutated Ganondorf named Ganon, causing Ganondorf to be sealed into the Forbidden Realm, saving Hyrule in the process. Link regains his childhood, so he has never had to worry about Ganondorf again.

Link receives the Ocarina of Time from Zelda and went on the Lost Woods before getting ambushed by the possessed Skull Kid. Link is then turned into Deku Link, but Link manages to get the Ocarina of Time back stolen by Skull Kid. Link learns the song of healing and he is freed from the Deku curse, turning the Deku into an mask form, so Link can keep his Deku form under control. Link manages to find the Four Giants in the Temples by killing Odolwa, Goht, Gyorg and Twinmold to stop the Moon from destroying Termina, after the moon stops, Link receives the Fierce Deity's mask from Majora who released Skull Kid. Link transforms into Fierce Deity Link who ressembles his adult form, but his size is bigger than normal. Link manages to kill Majora and the Boss Remains and saved Termina in the process, causing the moon to disentegrate into nothingnes. Link turns back to normal and sees an fully-freed Skull Kid who recognizes him as a kid with a fairy who taught Saria's song. The Happy Mask Salesman who decides to keep his mask to make that Skull Kid will not steal it again. As Happy Mask Salesman, Skull Kid, The Giants and Link go to seperate ways. Link returns to the Lost Woods to find Navi as Skull Kid draws Link and him including Tael, Tatl and the Giants on the tree. 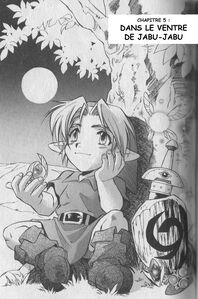 Link as a child 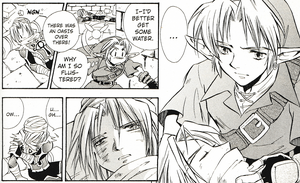 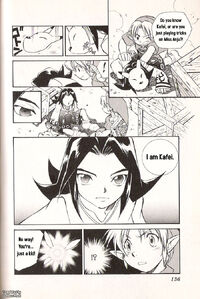 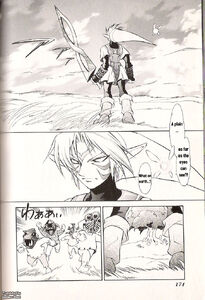 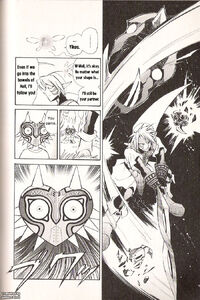 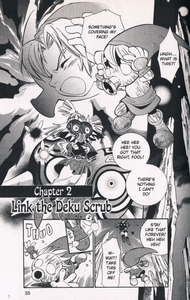 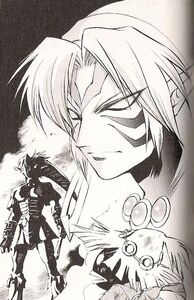 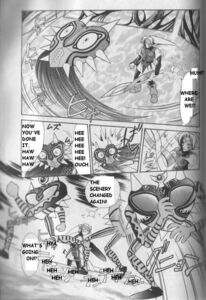 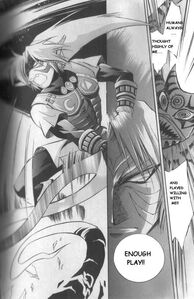 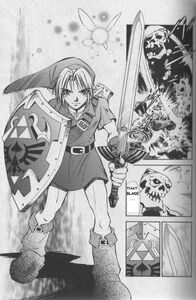 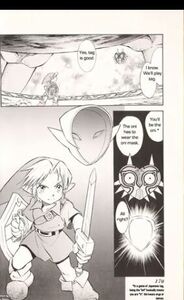 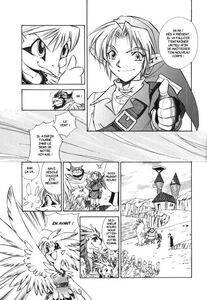 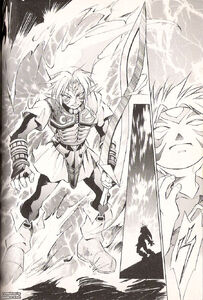 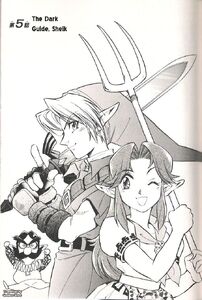 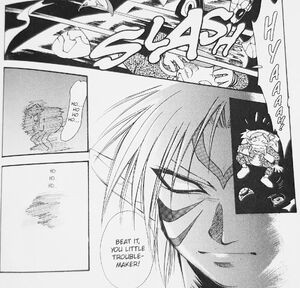 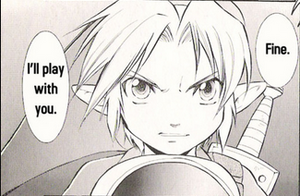 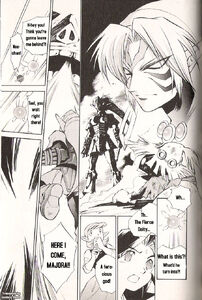 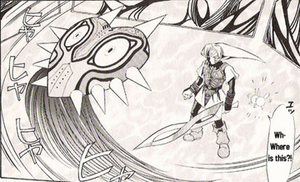 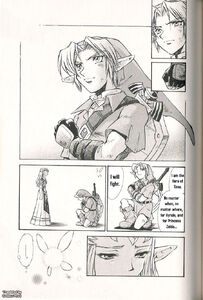 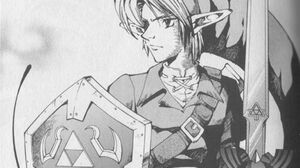 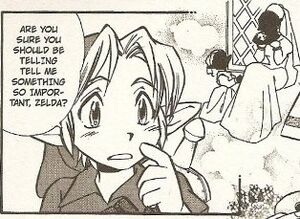 Retrieved from "https://hero.fandom.com/wiki/Link_(Ocarina_of_Time_and_Majora%27s_Mask_manga)?oldid=1982598"
Community content is available under CC-BY-SA unless otherwise noted.