The Legend of Zelda Television Series

Asking Zelda for a kiss.

Link is the main protagonist of The Legend of Zelda television series and lived in North Castle where King Harkinian and his daughter Princess Zelda live.

He is voiced by Jonathan Potts.

Unlike his mainstream counterpart, Link in this series is known for being extremely rude, egotistical, arrogant, and rebellious; preferring to travel the land freely to fight monsters rather than guard the Triforce of Wisdom, which he loathes to do, despite that it is constantly in danger of falling into Ganon's hands if left unattended for even a moment. He is, however, happy to be at the castle to be closer to Zelda, who detests his personality, and is annoyed more when Link asks her for a kiss, and when he gets scolded by her for anything, his most common response is "Well, excuuuuse me Princess!". Even when Zelda does decide to do so, they kept on getting interrupted by various distractions, be they from Spryte, Ganon's minions, etc. Despite their love-hate relationship, they do care about each other from time to time and often look out for one another. Being somewhat immature, Link tries to avoid many responsibilities given to him, though when the situation does get very serious, he does end up doing the right thing in the end. Even then, Link's clumsiness tends to spoil everything.

By Captain N. The Game Master, Link is portrayed as older and is noticeably more mature, responsible, and no longer having any obsession with getting a kiss from Princess Zelda and more competent and helpful than he was in the original series.

Link is a very fast thinker and a capable swordsman who wields the short Crisswood Sword that can shoot Sword Beams at his foes, has a concealable shield that grows to normal size when he pulls it out to defend himself and is quite acrobatic in combat. 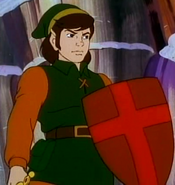 Link in the Zelda Cartoon.