Linnie is a mysterious protagonist in WhisperedFaith.

Linnie is first mentioned in WhisperedFaith when her name is found in a diary by Lee. She is also mentioned by Sean at one point. Linnie introduces herself in A Request, revealing her to be the person who saved Lee on the bridge from The Family, and her to be the mysterious "L" who had been messaging him.

Lee eventually responds to her request to meet her in the middle of a park. He is transported into another dimension (possibly the Candleverse), where he talks with Linnie face to face. She tells him that she had saved him on the bridge before because he is important. Linnie gleefully gives Lee the knife he had obtained and lost in the past. A ringing is emitting from the knife, Linnie explains this to be the knife 'singing' for her sisters (other Carriers.)

Linnie informs Lee that he is called "Carrier" because he 'chose' the knife when he initially picked it up. However, their session is interrupted when The Rake begins approaching. Before Lee leaves, Linnie warns him that important yet terrible things are coming. Linnie apologizes to Lee right before Lee returns to his universe (Earth). 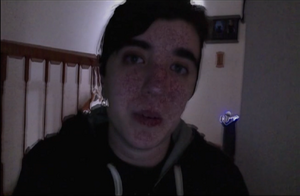 Add a photo to this gallery
Retrieved from "https://hero.fandom.com/wiki/Linnie?oldid=1860903"
Community content is available under CC-BY-SA unless otherwise noted.