Guardian of the Crystal Gems

Lion is a magical lion-like creature from Steven Universe. Steven tries to befriend in the episode "Steven's Lion". Lion protects Steven, as seen in "Steven's Lion" and in "So Many Birthdays". It is highly implied at that Lion has a connection with Rose/Pink Diamond.

Lion has dark pink fur and a lighter pink mane and occasionally has glowing white eyes. At the end of his tail, there is a lighter pink fur that matches the mane. Lion's nose is brown.

Lion is an enigmatic character whose sentience and sapience is somewhat questionable. Much like a normal animal he rarely changes his expression, but for the most part he is quiet and docile. Though he can be considered a "pet" for Steven, Lion looks after himself and often "does his own thing". While Lion does not seem to acknowledge Steven most of the time, he does seem to understand Steven to a certain extent, responding whenever Steven needs him in enigmatic ways. This is shown in "Lion 2: The Movie" when he takes him and Connie to Rose's Secret Armory when he remarked how he was not "trained very well", or how he nearly smothered Steven's face to show him the dimension in his mane when he said he wanted to know more about his mother in "Lion 3: Straight to Video."

Lion has a supersonic roar that can destroy/knock down brick structures, and open portals to places like Rose's Secret Armory, and he has been shown to be capable of leaping far distances. Lion has incredible stamina, as shown in "Ocean Gem" where Lion kept pace with Greg's van for a whole day while carrying Steven and Connie. Lion can also walk on water, and summon Rose's sword from his head/mane . This gives the impression that Rose Quartz is linked with Lion somehow. This is further supported when it is shown that Lion's mane is a portal to a pocket dimension filled with items Rose Quartz collected, such as her aforementioned sword, a photo of Rose and Greg, a videotape of Rose and Greg, a treasure chest, the T-shirt Greg gave Rose when they first met, a tattered flag with Rose's symbol, and an item in a Rose Quartz bubble. 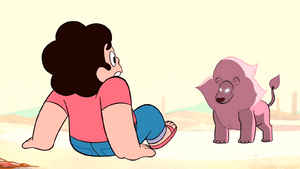 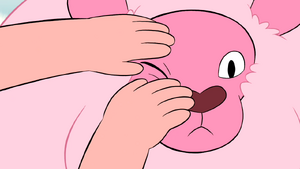 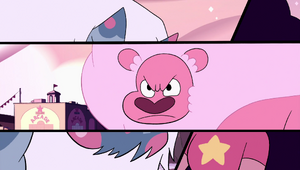 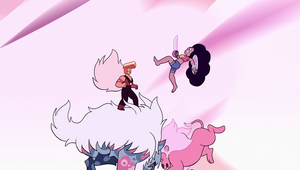 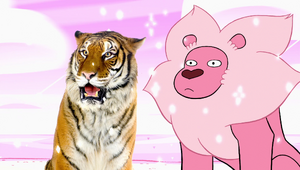 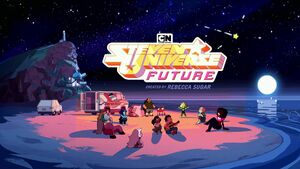