Lip is a brown-haired girl who wears a yellow dress with a circular flower in the middle of the dress, she wears a pink skirt, brown shoes with flowers and two pink bracelets.

Lip appears in Captain Rainbow who her dream is to become a great magician.

Her stick appears as a item that cause the enemy gain damage for a short amount of time.

Lip's stick returns as a item, a remix of Lip's theme can be played on the PictoChat stage.

Lip's stick returns as a item in both versions, Lip's theme only appears in the Wii U version and can be played on the Wrecking Crew stage. 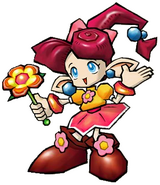