The Lippy the Lion and Hardy Har Har Show

Whoever obstructs them from completing their adventures

Lippy the Lion & Hardy Har Har are two characters in The Hanna-Barbera New Cartoon Show of 1963, the others being Wally Gator and Touche Turtle and Dum Dum.

Lippy is usually somewhat cheerful, and happy in most occasions. Hardy Har Har is somewhat depressed most of the time, while real life hyenas are mostly happy, Hardy is usually depressed - if he smiles it hurts him.

The two are depicted going on verses misadventures together, they can also appear alone sometimes, in Yo, Yogi! a pre-teen Hardy Har Har appeared, in Yogi's ark lark the two appeared together.

Lippy is a lion, wearing a violet colored hat and a purple vest.

Hardy Har Har is an hyena, wearing a purple hat, a white collar and a black bow tie.

Lippy The Lion and Hardy Har Har are two characters who usually seen together, the two go on verses misadventures. 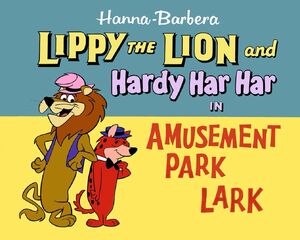 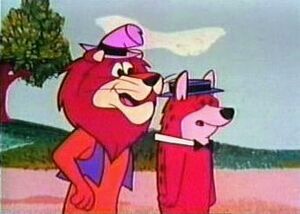