Lisanna Strauss is a supporting protagonist in the anime/manga series Fairy Tail. She is a Mage of Fairy Tail, one of the three Take-Over Siblings and the younger sister of Mirajane Strauss and Elfman Strauss. A childhood friend of Natsu Dragneel, she was supposedly killed when Elfman lost control of his Beast Soul magic and hit her in a blind rage. However, it's revealed later that she didn't actually die, but instead got sucked into Edolas via an Anima, after which she found herself at a different Fairy Tail guild. Discovering that the Edolas Lisanna had died, she decided to live out her life in Edolas, in order to stop the Edolas Elfman and Edolas Mirajane from being sad. Eventually, she is returned to Earth-Land when Mystogan activates the Reverse Anima and is reunited with her siblings and friends.

Lisanna is a young girl with short white hair, and blue eyes. As a little girl, Lisanna wore a simple, pink dress paired with dark red shoes. Before being sent to Edolas, her hair was quite longer, and she wore a short, dark red dress with a white collar and bow. Up on her arms above her elbows, she wore gold rings with a pale pink fabric flowing down from them. She wore tall, black socks along with brown shoes. In Edolas, Lisanna wore a tank top with crossed straps with a longer skirt. A sash with the Fairy Tail mark was tied around her waist and she wore sandals. Her hair was also worn shorter than it was in Earth Land. After Lisanna arrives back in Earth Land, she wears a light-blue striped shirt, with green short-shorts and sneakers. On Tenrou Island, Lisanna wears light green shirt and blue pantie-shorts with a pair of purple slippers. After the 7 year time skip and during the Grand Magic Games Arc, Lisanna is seen wearing pink spaghetti shirt with a ribbon in the middle and long jeans with flower patterns on it.

When Lisanna was a little girl, she was very kind like Elfman. She wanted to help Natsu Dragneel raise an unknown egg to see what comes out of it, being a little more knowledgeable than Natsu. After seeing a softer side of the usually flamboyant Natsu, she stated that he was a lot like her sister and joked that perhaps later she should become his bride/wife which predictably freaked him out. Whilst raising the egg with him, he learned it was "impossible" to win in an argument with her.

Even after her time in Edolas, Lisanna has remained largely the same, and once commented on how much her apparent death had caused her siblings (Mirajane in particular) to change. Judging by her type of magic, Lisanna apparently likes animals (especially cats) but she hates studying. Because of her personality, she can easily adjust and be accepted by anyone. 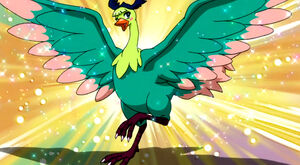 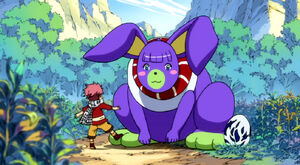 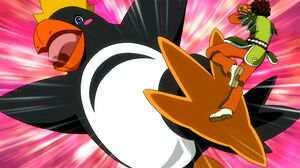 Penguin Soul
Add a photo to this gallery

Retrieved from "https://hero.fandom.com/wiki/Lisanna_Strauss?oldid=1978813"
Community content is available under CC-BY-SA unless otherwise noted.