Lissa  is a playable character from Fire Emblem Awakening. She is the younger sister of Chrom and Emmeryn. She is a cleric and the mother of Owain.

Lissa is a young lady with pigtailed blonde hair with buttoned white headdress and blue eyes. She wears a yellow dress with a cage skirt with a white apron. her legs and feet have white stockings and brown boots.

Lissa is a playable character in the gacha mobile game, Fire Emblem Heroes. She is one of the many characters who is summonable in the initial game launch and is one of the twelve characters who are part of the Hero Battle rotation. Her winter variation was added on December 18, 2017, under the "Winter's Envoy" banner.

Lissa appears as an playable character in Fire Emblem Warriors.

Lissa is shown to be energetic, playful and tomboyish. She tries be a ladylike girl and she is kindhearted and cheerful. She cares for her family and friends a lot, like Chrom, Emmeryn, Owain and Maribelle.

She starts off as the first healer of the game. She starts a heal staff but can’t defend herself until she is not a cleric or troubadour. 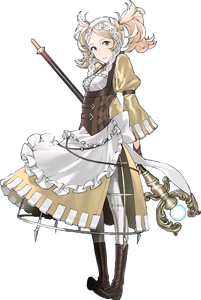 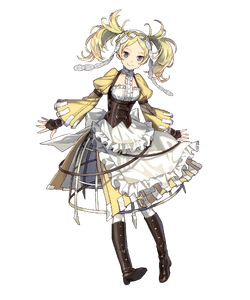 Retrieved from "https://hero.fandom.com/wiki/Lissa?oldid=2005245"
Community content is available under CC-BY-SA unless otherwise noted.