To help provide for the poor

Little John is Robin Hood's sidekick and the deuteragonist of the 1973 Disney film of the same name of the latter. He is portrayed as a grizzly bear. He used to steal rich from Prince John, though he is reluctant and just doesn't want trouble. He is voiced by the late Phil Harris, who had previously voiced Baloo in The Jungle Book and Thomas O'Malley in The Aristocats.

Little John is often seen alongside Robin Hood, first escaping from the Sheriff of Nottingham and his posse. Despite the successful escape, Little John worries about being captured and hanged. He later attempts to cite a law against robbing royalty to try to get out of robbing Prince John. However, he assists Robin in the robbery of Prince John while disguised as a gypsy. While Robin is in the royal coach with the Prince, Little John remains outside and steals gold from a large chest as well as the gold hubcaps of the coach.

Later on, he is seen in his and Robin's hideout trying to encourage the lovesick Robin to propose to Maid Marian, whom Robin loves. He then gets angry with Robin for not paying attention when he was supposed to be tending to the fire, annoyingly saying "Aw man, you burnt the chow!" Robin seems unconcerned about the blackened food and dismisses the suggestion of engagement, claiming his outlaw status would not fit life with Marian. Little John somewhat sarcastically remarks for Robin to think of something, for he sure is not going to impress Marian with his cooking abilities (as John annoying adds spices to try to salvage his dinner). When Robin hears about Prince John's archery tournament, where Marian's kiss is the prize, Little John notes that Robin could win it "standing on his head" but also fears that the Prince's guards, as well as the Sheriff, will be at the tournament. Little John is next seen at Prince John's archery tournament, reminding Robin, who has disguised himself as a stork to enter the tournament, that he must fool the Sheriff of Nottingham during the tournament. While Robin enters the tournament, Little John, disguised as a nobleman named Sir Reginald, Duke of Chutney, consorts with Prince John. Little John is instrumental in helping Robin to avoid execution after he is captured by threatening Prince John's life if Robin is not released.

Later, while he and the folks of Nottingham (including Friar Tuck and his mice) are meeting Robin and Marian in Sherwood Forest, Little John begins playing his song "The Phony King of England" on his lute, and dances with Lady Kluck.

Near the end of the film, Little John assists in a jail break, to rescue the citizens of Nottingham as well as Friar Tuck, who is sentenced to hang at dawn. After Robin retrieves the jail keys, Little John frees all the townspeople; meanwhile, Robin climbs up to the royal treasury to reclaim the taxes that Prince John had taken from the people. Little John later impersonates the Sheriff to facilitate their escape and pulls a cart containing all the Nottingham residents with the intent of taking them to Sherwood Forest. When Robin is trapped in the castle, and forced to jump in the moat to escape, Little John is seen watching from the forest with Skippy. He, like Prince John, believes Robin to be dead, as the Sheriff's posse had been shooting at Robin. He is overjoyed to see that Robin has survived his escape from the castle, after initially believing the latter had been killed.

After King Richard returns, Little John is pardoned alongside Robin. He drives the coach containing the newlyweds Robin Hood and Maid Marian and allows Skippy to join them. 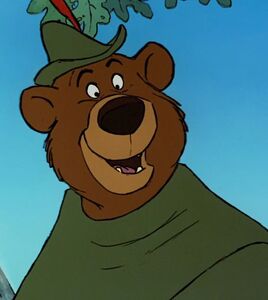 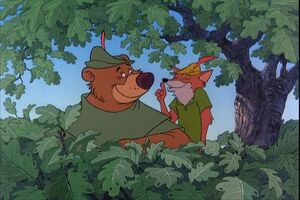 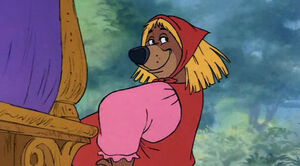 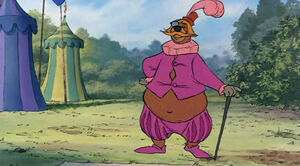 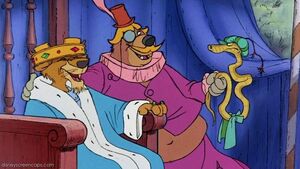 As Sir Reginald duke of Chutney, with Prince John and Sir Hiss 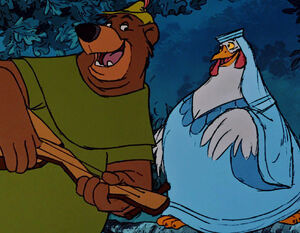 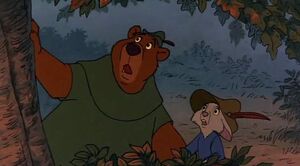 Little John and Skippy stare in shock, as Robin Hood is about to jump into the water from the burning castle
Add a photo to this gallery

Retrieved from "https://hero.fandom.com/wiki/Little_John_(Disney)?oldid=1253685"
Community content is available under CC-BY-SA unless otherwise noted.