Heroes Wiki
Register
Don't have an account?
Sign In
Advertisement
in: Related to Villain, Siblings, In Love,
and 25 more

Hanging out with Beefy, John, Peter, and Todd.
Jamming in his room.

Trap his brothers Adrian and Cassius into the flask in order to save their father, Satan, from dying.

Save the lives of everyone in New York from Adrian's plans, including his friends.
(both succeeded)

Nicky is the titular main protagonist of the movie Little Nicky.

He is the kindhearted, third and youngest son of Satan and an angel named Holly (played by Reese Witherspoon). Even though he is the son of the Devil, he is a very sweet boy and does not like evil and torture. He has two evil older brothers named Adrian and Cassius who torture him a lot. One day when they escape and ran away from Hell to take over the world such as New York City, Nicky must bring them back or his dad will die. Little Nicky sets off to find his mean evil Brothers, Cassius and Adrian. 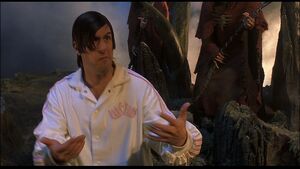