Heroes Wiki
Register
Don't have an account?
Sign In
Advertisement
in: Female, In Love, Sophisticated,
and 17 more

Her sunny disposition makes the environment that she is in happier.

Find what Charlie Brown really is (succeeded in the Peanuts movie)

Heather (AKA The Little Red-haired Girl) was an unseen character from the Peanuts comics, making her debut in 1961.

Due to her lack of dialogue, Heather has a largely enigmatic personality. However, she is known to be kind and cute, even when Charlie Brown worries otherwise.  She seems to like honesty, bravery, humour, and compassion, as seen in The Peanuts Movie when she praises what he did when they meet up at the bus. She admires the compassion Charlie Brown showed for his sister Sally Brown when she failed at the talent show, his honesty at the assembly during his revelation that his and Peppermint Patty's tests got mixed up due to her hurry and that she was the real genius, and at the dance, Charlie Brown was brave and funny. Heather Wold also admires his act of doing the book report while she was away, so she does not see him as a failure, but an entity who has the qualities she loves. She also seems to be thankful, as when Charlie Brown gave her her pencil, much to her delight.

Whether Heather is a tomboy or not is unknown, though she is not likely to be one in the specials. Heather Wold commonly wears a dress when we see her, though she may possibly wear a shirt and pants, or a shirt and overalls at certain points (those are unseen). The dress's design changes as well through each animation. In her debut appearance, it was pink with short, puffy sleeves. In Snoopy! The Musical, it is simpler and has a skirt. It is teal in the movie.

Heather Wold serves as the object of Charlie Brown's affection since her debut, and a symbol of unrequited love. Despite that, She always had a crush on Charlie Brown since, You’re in Loved, Charlie Brown. While never seen in the strip, she appears onscreen in several television specials, in which her name has been revealed as Heather (although it was not considered canonical by Peanuts creator Charles Schulz). Charlie Brown most often notices her while eating lunch outdoors, and always failing to muster the courage to speak to her. She also figures prominently in Valentine's Day strips, several of which focus on Charlie Brown's hope of getting a valentine from her (or anyone for that matter; typically Charlie gets nothing and Snoopy gets tons of valentines). Charlie Brown typically attempts to give her a valentine but chickens out at the last minute. Charlie Brown sometimes refers her as the Little Red-Haired Girl.

She only speaks in The Peanuts Movie, where she shares her voice actor, Francesca Capaldi, with Frieda Rich. She also appears in the snoopy show. 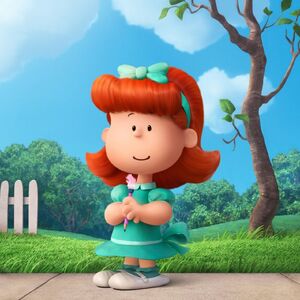 Heather in The Peanuts movie.
Community content is available under CC-BY-SA unless otherwise noted.
Advertisement