Heroes Wiki
Register
Don't have an account?
Sign In
Advertisement
in: Female, Land Before Time Heroes, Wise,
and 26 more

Littlefoot's Mother (a.k.a. Mama Longneck, as she is referred to as by fans), voiced by Helen Shaver, is a character in The Land Before Time film series. She is an Brontosaurus; one of many sauropods referred to as "Longneck" in the franchise, and the late mother of the main protagonist Littlefoot, the late wife of his father Bron, and the late daughter of Grandma and Grandpa Longneck. She, like her parents but unlike most of the dinosaurs in the first Land Before Time movie, is not bigoted towards other species, although she will generally avoid those of other species because things have been done that way for a long time.

She plays a major role only in the original film, during which she is killed by the original Sharptooth (the scene for which the character is most famous), but she is referenced several times in later films.

Littlefoot is the only son of Mama Longneck. As shown in the beginning of the movie, she had laid several eggs, but all except the one Littlefoot hatched from were broken. She is shown to be a very loving mother to her only son. When Littlefoot's egg is snatched by an Egg Stealer, Littlefoot's Mother attacks the egg stealer, causing him to drop the egg into the river. When the egg rolls down onto dry land, and hatches, she and Grandma and Grandpa Longneck come down to where it has landed. Mama Longneck then licks her son lovingly, and when he shows fear of several small creatures who are congratulating his family, she lifts him up and put him on her back.

When Littlefoot grows older, she tells him all she had heard about the Great Valley, and how she plans to take him there, as it will be safe from predators and abundant in food and water. She also warns Littlefoot, after Cera's father Topps tells Littlefoot to stay away from his daughter, that the species tend to be segregated, although she doesn't understand why, as all she could tell her son is that "it's always been that way." then she comforts her son by reminding him that in the Great Valley, "There will be many, many Longnecks for you to play with."

Her husband was Bron, a brown-colored longneck who first appears in the tenth film. The two loved each other very much, and Mama Longneck named their son after Bron's childhood nickname. Unfortunately, he left in search of a land unaffected by the famine so they could raise Littlefoot without the dangers of their land affecting him. Littlefoot's mother is the daughter of Grandpa and Grandma Longneck, as Bron refers to Grandpa Longneck as "Papa Longneck" instead of "Father," and she was revealed to be their daughter in a book of the first movie. She also has the same under markings as her mother.

The canonical, Bambi-like death of the parent occurs when, late one night near dawn, she dies protecting Littlefoot and Cera from Sharptooth. She puts up a tremendous fight and casts him into the "big underground", the bottom of a Grand Canyon-like gorge that has just been torn open by a tremendous earthquake. However, Sharptooth is not dead, and even this fleeting victory costs Littlefoot's mother her life, as Sharptooth has bitten a large chunk of flesh out of her back and gashed her neck in their fight (implying that she may have died from either blood loss or infected wounds or even both). With her last breath and her last words, she tells her son to search for the Great Valley and that she will be with him, even if he can't see her. Later, her spirit would appear to her son in times of need and aids him in the quest for the Great Valley.

Her death would later be avenged when Littlefoot and his new-found friends, after several encounters, killed Sharptooth once and for all. Her last appearance is at the end of the first film when Littlefoot despairs of ever finding the Great Valley; she takes to the form of a longneck-shaped cloud to guide him into the Great Valley, whereupon a beam of light comes from her heart. The light shines on Littlefoot and spreads to illuminate the Great Valley below, there Littlefoot would be reunited with his Grandparents. With the Sharptooth dead and her son back in the care of his remaining family in a new safe home, Littlefoot's mother finally achieved all she wanted for her son and thus was free to rest in peace.

Though long since dead, she is periodically mentioned through the film series and may make an appearance in The Land Before Time V: The Mysterious Island (this is proven with a Longneck that resembles her close to Littlefoot's grandparents). Littlefoot remembers his mother and looks at a star shining brighter than the others. In The Land Before Time IX: Journey to Big Water, Littlefoot wishes that his mother had given him a brother, and looks at a cloud which forms the shape of a Longneck, which could possibly be her, as she appears as a cloud in the first film.

She also makes an appearance in a flashback in The Land Before Time X: The Great Longneck Migration. In this film, she is seen blue-ish, and looks more like her parents, though in the first movie, The Land Before Time, she is seen to be brown like Bron. During Grandpa's flashback in "The Legend of the Story Speaker", a young longneck is shown playfully sliding down his tail into the water, from a distant shot, while Saro and another small longneck are seen in the water near them - possibly a relative, sibling, or a child of Saro's. This may be the only instance in which Littlefoot's Mother is shown as a child.

Littlefoot is only her son, she loves her so much after he is hatched. When Daddy Topps ordered him to stay away from Cera, she tells him that they many Longneck to play with him. She also gives him a Treestar. After her death while saving Littlefoot and Cera from the Sharptooth who is also killed by them in his final attempt to kill them, she guides him into the Great Valley where her parents already there after the big earthquake.

She loves her parents too. After her death, they were devastated upon learning of her death and they are happy that they have their grandson Littlefoot back.

Bron is her husband, they are always in love together and find a better place where they can live, their son Littlefoot and Grandpa and Grandma Longneck in peace. He later learn that his wife died during the big earthquake upon hearing from a dinosaur who informs of her fate and his son.

She encounters Daddy Topps who is growling at her son Littlefoot believing he is a bad influnce on Triceratops, immediately distrusts and hates him due to his terrible bad behavior and personality. She later earns his trust, when he saved him and Cera and the others from Chomper's parents. When Littlefoot is falsely accused of wasting the water in the river by Hyp, Nod and Mutt due to the Thundering Falls blocked by the rockslide caused by the Flying rocks on the Mysterious Beyond, she automatically reignited her distrust on Daddy Topps again when he openly called him a bad influence right in front of her father and everyone else specially Cera. She was again re-earned her trust again when he finally reconciles his insult on her son to her father. 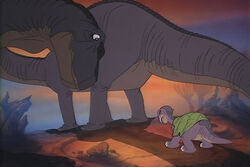 Littlefoot's Mother with her son. 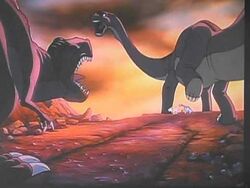 Littlefoot's Mother protecting him and Cera from Sharptooth

Littlefoot's Mother fatally injured from her fight with Sharptooth 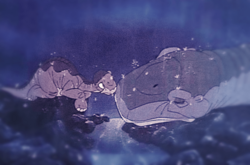 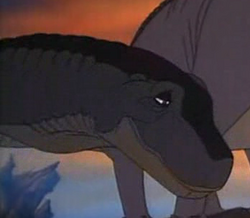