NOTE: This article is about the incarnation of Liu Kang from the Mortal Kombat (2021). The mainstream version can be found here: Liu Kang.

Shaolin monk from Order of Light

Stop Shang Tsung and his forces (succeeded).
Save Cole, Allison, and Emily from Sub-Zero (succeeded).

Liu Kang is one of the major characters of the 2021 live-action film, Mortal Kombat. He is the Shaolin Monk from Order of Light who would using his fire powers and served as one of the most loyalty and skilled warriors of Lord Raiden along with his best friend, Kung Lao.

He is portrayed by Ludi Lin, who also played Zack Taylor in Power Rangers (2017).

With maybe takes of journey by after, Cole Young, Sonya, and Kano traveled to Lord Raiden's temple, Liu Kang arrived as he meets them on the first time. Kano, who would be had doubt towards Liu Kang, in even while tried to taking his knife to attacked him. He then blasted Kano with his fire to his calm down and told him he is not his enemy. All yet, Liu Kang was introduction of himself because he is from the Shaolin Order of Light, which Sonya admits him as one of the Earthrealm's champions, nothing their dismay. But Kano was amazement of Liu Kang's fire ability, which just now to gains superpowers. He eventually places his hand to touching Kano's shoulder telling him there's much to learns.

Upon his leads the group to Raiden's temple, Liu Kang speaks with them in fact having they started into normally training for the next Mortal Kombat tournament. Now that is entering inside on the temple, Liu Kang showed that Sonya to the victim Jax Briggs, a major of Special Forces who was gets injured both his arms were ripped by Sub-Zero, an ninja assassin of the Lin Kuei clan. With the help of treating Jax, Liu Kang explained that his charged to gather the champions and by much is too late for him so he would warrant Sonya. He and all the champions are encountered with Raiden, the thunder god who is not be impressing which what he would worked with them. Liu Kang able be respecting to him.

Suddenly, Raiden blasted Kano with his thunder power, Liu Kang begins to his training, wherever he stop Shang Tsung and his minions from invasion of the temple. When Sub-Zero appearing to ambushed Liu Kang, Kung Lao, a descendant of the grand champion of the Order of Light who teleporting up into saved his partner after he using his razor-brimmed hat to defeated Sub-Zero. He accepted for it making the warriors introduces to Kung Lao. They begins to training, Sonya asked for staying have trained in fact to inkling she can. He rejected, its said that a fight without a dragon marks maybe not realize of their Arcana, forasmuch of the duties. They need to be attentive going on the sensible.

By the way, Liu Kang and Kung Lao eventually works out of trained with Kano and Cole, but due to mastery of them were isn't done. Upon Cole was setback upon his hurts in the fights, he direct to asking Kang about that how he supposed to find his arcana. Liu Kang convinced him anyway which saying that must comes from within, Cole talked to him how he found his Arcana. Plus, he could confessed of it thought that he is only drift, adopted, and brings to the Wu Shi Academy even aftermath of sought half-dead at the gutter. After his graduation, Liu Kang was giving the name of a man who had selling in the orphans, on yet he killing him and took his marking, likes this in be unlocked his Arcana.

During their practicing, Liu Kang fights with Kung Lao which they should joined into the dinner with Sonya and the other warriors. When Kano asked Kung Lao, regarding he intended passed him an egg roll to be eat. Turned out that way, Kano calling him as "Kung Pao". Kung Lao refused to hearing Kano's nonsense, because of he quickly eating egg roll. Liu Kang would denote that he must listened, Kung Lao calling Kano is a fat, lazy pig, and terrible fighter with nothing skills. Kano then gets mad when he purposely humiliated on Kung Lao, upon Liu Kang able speaking to him, really to about by his wanted prejudiced the man but could survive in outcomes, calling him an aggressive bunny.

Making out for that is becomes too fury, Kano asking them all having befitting under his sinister via trying to released his Arcana, his eye laser of his right eye blasting into accidentally, lead Kung Lao using his hat to have blocked not be damage. Kano extremely happy to his powers told Liu Kang that it's better than his fireballs but called him a pussy, much to his joke. In the next time, Liu Kang had watched Cole deal with Kano as they keeping the training. Too late, Cole is defeated by Kano such he takes to rest. Sonya, who wanting appear talked to him. At the point, upon Raiden unexpectedly showed up and asked him immediately, just wondering how to give him these reasons.

But will understand it, Raiden later revealed to Cole, who was a descendant of Hanzo Hasashi, the greatest ninja of Shirai Ryu clan. Long time ago, Bi-Han slaying Hanzo's family, he violently to murdering Hanzo and lets him descended to the Netherrealm. Thus, Hanzo becomes a spectre which he turning to nickname called Scorpion, with the bloodline of the Hasashi family to living. Cole hope that he feeling sorry to Sonya, and Raiden using his thunder power to establishing of the portal, making him returns to home and care for his family. Later in the life, Kano was a traitor who have betrayed the Earthrealm warriors, since Shang Tsung's forces assaults of the temple.

Despite the dreaded matters, he joined Shang Tsung, Kabal, Mileena, Reiko, and Nitara, to help destroyed Liu Kang and all the fighters. And lasting fact, Goro helps Shang Tsung to defeats the forces of the Earthrealm as he necessarily battle to Cole. The fiercely fights was begins, Liu Kang fights into Kabal, Sonya fights with Mileena, Jax is fights Reiko on the felt was Kung Lao, who deals with Nitara. Cole fatally killing Goro with his using Tonfas and big powers soon, and could have be safe for his wife and daughter of course, discovered that the lightning is the doorway, which then he will returned to Raiden's Temple. With paying back for every, Shang Tsung kills Kung Lao and by eventually sucking his souls, Liu Kang seeing him be scamp on terror tragedy, and hold by Cole in the prim.

However, after Raiden transporting him and the other warriors into the Void, Liu Kang proving to his pain, due to his ought dies together with Kung Lao. While Kung Lao is gone, by causing Earthrealm had lost, Cole devise his plan how then making all the warriors takes down the Outworld warriors, he decided does, asking to Raiden that he able sending everybody any places. In the battles, Liu Kang preparing wears his red headband into his head, which continuing to fights with Kabal, Cole chosen against Mileena, Jax defeated Reiko, and Sonya against Kano. Kabal used his speed attack by wounding him therefore of play, Liu Kang gains of his bicycle kick to attacked Kabal and covering him in the black quicksand, summoned a dragon fire to annihilate him stand up mortally.

After Kabal's demise, Cole transporting to fights Sub-Zero, who managing freezing his family. Hopefully, Scorpion appearing to murder Sub-Zero might enough to avenge of his family death, and Cole agree to have will victory save his wife and daughter, Liu Kang and the other Earthrealm warriors were formally returning which Cole introducing them to his family. He using his fire to warming them up, although Raiden saw the corpse of Bi-Han. Liu Kang watched with all the warriors upon Raiden wants to banished Shang Tsung, send him away with the lightning power. Yet real in these way, Cole had searching for the next generation of the champions. 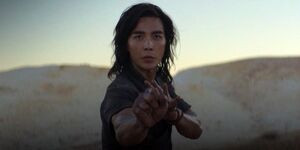 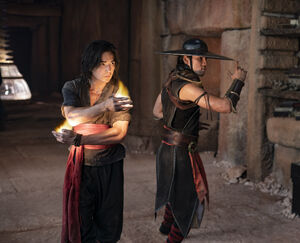