Olivia "Liv" Rooney is one of the two titular main characters alongside her twin sister Maddie in the Disney Channel original series, Liv and Maddie. Liv also has two younger brothers and two parents that both work at her school. She is a television star who shows just ended. When she returns home from filming her TV series in Hollywood to her family in Wisconsin. She becomes a bit more popular when attending the same public high school of her siblings, which little to her knowledge, is a big problem to Maddie. Liv is more of the girly-girl compared to Maddie. It is possible that Liv is short for Olivia.

She is portrayed by Dove Cameron.

Liv is perky, energetic, and is very into fashion. Liv loves acting and singing and is very confident and enthusiastic when asked to do either of them. She always puts her family and friends first, and even when she messes up when trying to help them, she always has the best intentions at heart (as seen in Twin-A-Rooney and various other episodes). She is sweet, graceful, often sees the good in everyone, and gives everyone a fair chance, even if they are usually are a bad person (as shown in Steal-A-Rooney).

Liv has wavy blonde hair, green eyes, and light skin, just like her twin. Liv is often seen wearing outfits that are a lot more on the fancier side. She wears skirts, dresses, cardigans, peplum tops, and shirts with girly designs. She doesn't usually wear simple clothing like her twin sister, Maddie. She dresses nicely with cute tops and skirts. 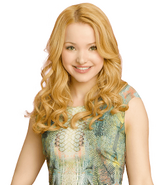 Retrieved from "https://hero.fandom.com/wiki/Liv_Rooney?oldid=1970109"
Community content is available under CC-BY-SA unless otherwise noted.