Get revenge on Superman (formerly).

Redeemed Villainess
Livewire is a heroine form DC Comics. Though normally seen as a villainess, she has been redeemed from her past crimes as well and she united with Superman to save the world afterwards.

Leslie Willis is a Metropolis radio personality who built her career by bashing Superman on the airwaves. She finds herself suddenly possessing electrical superpowers after both she and Supes are struck by the same lightning bolt during a thunderstorm. Blaming him for her condition, she soon adopts the persona of "Livewire" and takes her anger on the Man of Steel.

In the Superman Adventures comics, based on the DCAU animated series, Livewire makes an appearance in issue #5, "Balance of Power", the two-part "War Games" (#22–23) and in the two-part finale (#65–66), "Power Play", the latter also featuring Lex Luthor and Darkseid. She is portrayed more sympathetically in the comics, teaming up with Professor Hamilton and putting all of her energy into stopping Brainiac in "War Games", which puts her into a coma until she awakens in "Power Play", where she officially reforms.

A reformed Willis has recently become a founding member of Superman's new team, the Supermen of America. 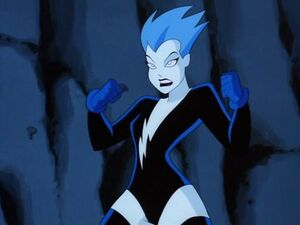 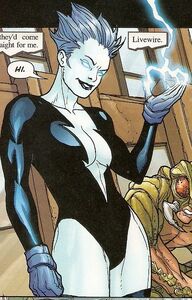 Add a photo to this gallery
Retrieved from "https://hero.fandom.com/wiki/Livewire_(DC_Comics)?oldid=1879962"
Community content is available under CC-BY-SA unless otherwise noted.