Start a Wiki
Liz Wilson is a recuring character of the Garfield comic strips, animated series and Garfield: A Tail of Two Kitties and the tritagonist of Garfield: The Movie. She is a vet, Jon's on and off girlfriend, and a good friend of Garfield.

She is voiced by Julie Payne in Garfield and Friends, Garfield on the Town, Garfield's Thanksgiving, and The Garfield Show. In the 2004 live action film Garfield: The Movie and its 2006 sequel Garfield: A Tail of Two Kitties, she was portrayed by Jennifer Love Hewitt, who also played Madellaine in The Hunchback of Notre Dame II.

She is Garfield's veterinarian and a long-time crush of Jon Arbuckle. Although she has somewhat of a deadpan, sardonic persona, she never reacts negatively to Jon's outlandish and goofball behavior, even finding it endearing on occasion. Jon often attempts to ask her out on a date, but rarely succeeds; however, in an extended story arc from June 20 to July 26, 2006, Liz finally admitted she was in love with him which led to Liz becoming established as the 4th main character. The two have been portrayed as a couple since. In the film Garfield: A Tail of Two Kitties Jon asks Liz to marry him and she accepts; they become engaged. However, this is not mentioned in or connected to the strips. Even though Garfield no longer sees her at the veterinary clinic, Liz nags Garfield to lose weight and reject junk food at home. However, Liz still does bring food that Garfield likes to the house and Garfield happily benefits from her.

Jennifer Love Hewitt as Liz in the live-action movie 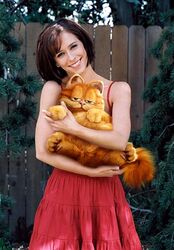 Jon and Liz reuniting with Garfield and Odie

Liz in the Garfield show

Add a photo to this gallery
Retrieved from "https://hero.fandom.com/wiki/Liz_Wilson?oldid=1655384"
Community content is available under CC-BY-SA unless otherwise noted.