Lizzie is the widow of Radiator Springs beloved founder Stanley (a statue of him is depicted at the town hall). Lizzie owns the Radiator Springs souvenir and accessory shop and seems to have a crush on Lightning McQueen (despite him being far younger than she is).

In the original film, she owns the local curio shop, and collects postcards that she sells and keeps as a hobby. She has a knack for sneaking up on people and slapping their rear end with a souvenir bumper sticker, which gets on most cars' nerves. She clearly has short term memory loss, and like Fillmore goes on and on about "the old days". As Lightning McQueen helps bring Radiator Springs back to life, Lizzie is seen talking to the statue of her husband, saying, "Oh, Stanley, I wish you could see this.", implying that she still misses him. She apparently has short-term memory problems which showed through several times in the movie.

Lizzie has a much more minor role in the sequel. At the beginning, Lizzie is only seen in the crowd of townies greeting Lightning McQueen when he comes back home to Radiator Springs, but didn't even know that he was gone all this time. Lizzie is a minor character in the sequel. Strangely, she doesn't see him off at the airport. At the end while Mater is telling a story she talks with Mack, about how crazy Holley is for keeping a dent. 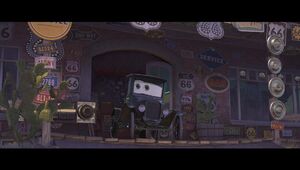 "Red, could you move over please? I wanna take a look at that sexy hot rod!"

Lizzie, Sheriff, and Red in Cars 2

Retrieved from "https://hero.fandom.com/wiki/Lizzie_(Cars)?oldid=1695435"
Community content is available under CC-BY-SA unless otherwise noted.