Lloyd Irving is the main protagonist of Tales of Symphonia, the fifth major release in the Tales series. Once but a simple country boy, Lloyd Irving is trusted out into a journey of epic proportions following a brutal attack on his village. The Chosen of Regeneration is in fact one of his dearest friends, and after an exile from his home, Lloyd Irving joins her on her Journey of Regeneration. Although the young warrior himself plays no part in the prophecy as such, he is still a strong optimist and a fair leader.

He is voiced by Katsuyuki Konishi in the Japanese version, and by Scott Menville and Brian Beacock in the English version.

A 17-year-old human who was raised by a dwarf, Lloyd leaves his home town of Iselia to follow his childhood friend Colette on her World Regeneration journey after having been banished from the village, where he's held responsible for the attack they suffered from the Desians. At the beginning of the game, Lloyd is a typical overly idealistic Idiot Hero, but he grows upon discovering the world as it is, making his idealism into a goal to save both worlds and everyone living inside it.

Lloyd's main weapons are his dual-wielded swords that come in a variety of shapes and sizes; some even being named off of Masume. Later on in the game Lloyld receives two swords which commonly represent two elements, Fire and Water; these two swords were given to him by his foster father Dirk. Lloyd's skills are all sword based, having only a bit of a magical faction to his attacks but more so he uses his swords to do most of his special combos.

The most notable thing about these skills is that they can be used together after normal slashes then using two or three skills to finish off the string; One of the best of these combos would be Sword Rain-Tiger Fang-Hunting Beast, also if a Fire element (the sword doesn't count) is put to his swords his Rising Falcon then turns into Rising Phoenix turning it into a fire-based attack with more damage and AoE, most of these attacks could only be performed with the help of his exsphere which was made from the body of his mother. Some believe that his exsphere was evolving toward the end of the game where it finally made him gain angel wings.

Because he lives in an area that has a peace treaty with the Desians, Lloyd never actually understands how people are suffering at the hands of the organization. This causes him to be rather naive and short-tempered. He tends to make very rash decisions, regardless of what consequences his actions may have, claiming he is doing it for Colette. However, when it all ends wrong, he realizes his mistakes and attempts to repent for them. Under the guide of Kratos, he eventually matures through the journey, having witnessed people truly suffer. When he understands that people have to be sacrificed everywhere for the sake of others, Lloyd decides to stop "clinging to the Chosen", as Kratos describes it, and fight with his own strength and new ideals. What he wants is a world without sacrifices. Lloyd uses skill and logic to make up for what he lacks in knowledge, which is often a joke throughout the series as he fails to answer various educational questions. He is generally idealistic, and tries to do what he believes is best for the worlds of Sylvarant and Tethe'alla. As the story progresses, Kratos compares Lloyd to Mithos, saying the only difference between them is that Lloyd is capable of acknowledging his own mistakes. Another character named Tiga also compares Lloyd to Mithos by saying he is idealistic and very dearly wants to save both worlds, but Lloyd denies that he is like Mithos and claims he does not want to save the worlds through Mithos's methods, but in his own way without sacrifices and with the help of his friends.

Lloyd has made some cameo appearances in other Namco games including Soul Calibur Legends for the Wii. He has also appeared in other Tales games. 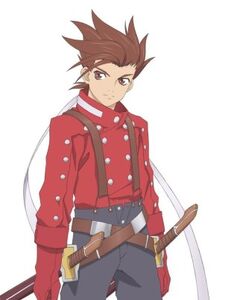 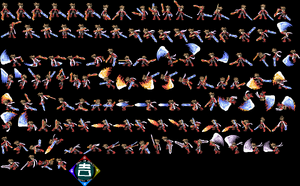