Lo Pei is a deceased character in the animated series Jackie Chan Adventures. He was a sacred warrior of the Ling Dynasty 900 years before the start of the series. He led a successful uprising against Shendu (whom Pei referred to as "the Ultimate Evil") and used a powerful spell to trap the Fire Demon in his statue form. The spell also divided all of Shendu's powers in the form of 12 talismans representing the animals of the Chinese Zodiac. Lo Pei scattered the Talismans to the four corners of the Earth, so that nobody would ever reunite them and release Shendu.

In "The Warrior Incarnate", Jackie and Uncle study a terracotta statue of Lo Pei in the hopes of finding out the locations of the undiscovered Talismans. Jade accidentally breaks the statue, but fixes it with the Horse Talisman. Then she uses the Rat Talisman to bring the statue to life, hoping it to tell the Talisman locations. The living statue of Lo Pei believes himself to be real, so he takes the Talismans stored in Section 13 to hide them in different locations once again. Jackie and Jade try to reason with him without success. The Dark Hand manages to steal the Talismans from him, leading him to team up with Jackie and Jade in order to retrieve them. When Lo Pei sees a poster of his statue form, he finally accepts the truth of himself being a statue. He makes Jackie and Jade to escape with the Talismans while he holds back the Shadowkhan. When they are at a safe distance, he throws the Rat Talisman to them and changes back to a lifeless statue.

In "Re-Enter the Dragon", Uncle forces the defeated Daolon Wong to reveal the spell that was used by Lo Pei to seal Shendu originally. That spell is used by Uncle and Section 13 to defeat and reseal Shendu. 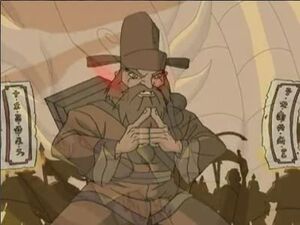 Retrieved from "https://hero.fandom.com/wiki/Lo_Pei?oldid=1724983"
Community content is available under CC-BY-SA unless otherwise noted.