Lob-Star is a ninja lobster in Skylanders: Trap Team.

He is voiced by Kevin Schon who also voiced Timon in The Lion Guard.

Hailing from the depths of the undersea kingdom of Star City, Lob-Star was the head chef of his own five-star restaurant, often cooking for the King Fish himself. However, few knew that Lob-Star had secretly been training in a mysterious art of fighting known only to a few crustaceans. For a while, Lob-Star was able to keep the peace while still keeping his hidden identity. But when a giant Leviathan threatened to swallow up Lob-Star’s guests and capture the King Fish himself, he had no choice but to swim into action. Calling on every trick his mysterious training had taught him, Lob-Star defeated the Leviathan and drove it out of Star City. For risking everything, Lob-Star was recruited by Master Eon to join the Skylanders. Now, as part of the Trap Team, he uses his powerful Traptanium Throwing Stars to serve up defeat to anyone who threatens Skylands! 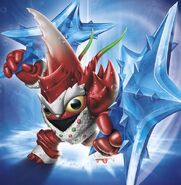 Retrieved from "https://hero.fandom.com/wiki/Lob-Star?oldid=2178264"
Community content is available under CC-BY-SA unless otherwise noted.