Unpronounceable (real name loosely translates: "He who devours your entrails and thoroughly enjoys it")

Lobo (real name unpronounceable, but loosely translates to: "He who devours your entrails and thoroughly enjoys it"), and known as Lobo II during the New 52, is a fictional character that appears in DC comics. He is an anti-hero in the DC universe, and the titular main protagonist in the same name franchise.

Lobo is from the planet of Czarnia, which he "fragged" before becoming a bounty hunter and enemy of Superman and the Green Lantern Corps. Though he shows himself to be ultra-violent and ruthless, he has occasionally allied with superheroes to stop threats. He was a member of L.E.G.I.O.N., R.E.B.E.L.S., the Suicide Squad, the Justice League of America II and the Justice League: Team Entropy.

He was created by Roger Slifer and Keith Giffen, and first appeared in Omega Men # 3 in June of 1983.

Lobo's name is unpronounceable, but icomes from a Khund dialect and roughly translates to "One who devours your entrails and thoroughly enjoys it". Born to unnamed parents on the planet of Czarnia, which was a virtual paradise that knew nothing of war and the Czarnians were almost immortal. When Lobo was born, his evil was very apparent, with the nurse delivering him going insane and became the planet's first mental patient in ten millennia.

Lobo knew he was one of a kind, and was inspired by the idea of genocide, created a swarm of lethal scorpion-like creatures. He set them on his people, wiping out his entire species but himself, and Lobo claimed that it was a science project and gave himself an "A".

After "fragging" his own planet, Lobo traveled around the galaxy as a bounty hunter, and developed a strict code of honor when it came to contracts. In addition, Lobo also developed a ruthless nature, and battled numerous superheroes along the way.

Lobo was hired by the Citadel's human agent Harry Hokum to capture the Euphorian known as Kalista, so the citadel could learn the secret behind her home world's planetary shield.

Lobo worked with fellow bounty hunters Bedlam and Berserk, they raided the mother ship belong to the Omega Men. Afterward, Hokum hired Lobo again to assassinate the Omega Men's interim leader, Tigorr, but Lobo never had the opportunity to complete the contract.

After the Citadel War, Lobo was then hired by Kalista's husband Primus to help them infiltrate a Citadel prison facility to free Primus' allies. During the prison break, Lobo killed the supreme commander of the surviving Citadel military force.

Lobo was hired by Manga Khan to take out the newly formed Justice League International, and came to Earth to battle the superheroes. Big Barda teleported Lobo across the galaxy, and he landed on Earth smack in the Justice League Embassy. After fighting Guy Gardner, Lobo pretended to be his friend so he could complete his contract. However, before he could act and eliminate the team, Manga Khan canceled his contract.

When Lobo's pet space dolphins were killed, Lobo tracked down the perpetrators to Vril Dox II's newly formed team called the L.E.G.I.O.N. Lobo crippled the entire team, but was halted by Vril, who offered to provide protection for the dolphins in exchange for Lobo's service. While working with the team, Vril took advantage of Lobo's ability to multiply, and poisoned him and his clones. Lobo was de-powered and lost his ability to multiply, but one of Lobo's clones escaped to the planet of Kannit.

During his service, Lobo followed Vril's orders out of some sense of honor, but didn't have no personal love for his teammates. When Vril was raped and killed by Stealth, he was cloned, and Lobo took advantage of Dox's vulnerability and attempted to kill the clone in order to be free from his pact. When Lobo was sent on an undercover mission to bring down Dagon-ra, Lobo joined Dagon-Ra's crew and lead a mutiny against him.

Lobo's history was altered for the New 52. In this continuity there are two Lobos, with the one resembling previous versions apparently an imposter and the original being quite different in comparison. The original Lobo was once a palace guard for the Czarnia loyal family until he discovered that the king was poisoning their home planet with his sick blood. Lobo was forced to slay the king and flee his world which eventually led him to become a intergalactic bounty hunter. He then learnt of a Czarnia slaver claiming himself to be Lobo and tracked him down to Earth in order to take his name back by killing him.

Lobo's history was changed again during DC Rebirth which reverted him back to resembling his "Post-Crisis" self.

Lobo is portrayed as a REALLY ruthless individual, but he is also really powerful, aggressive, has extremely low patience and self-centered. All of his interactions with other DC Characters were mixed while some seeing him as an adversary, while others see him as a hero because of his love for dolphins and when they are at stake. But overall Lobo's allegiance landed with whoever pay him the most money or something that Lobo has really wanted. 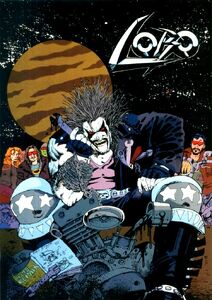 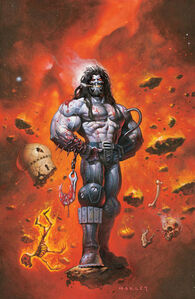 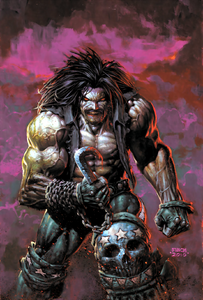 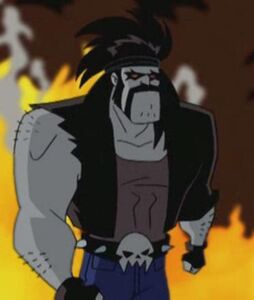 Lobo from the DC Animated Universe. 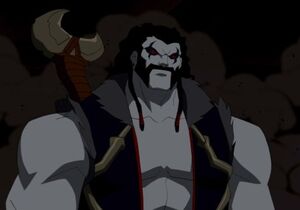 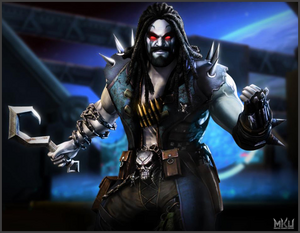 Lobo from Injustice: The Regime. 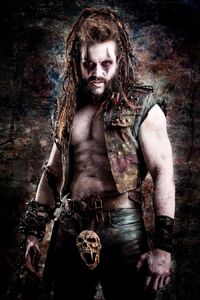 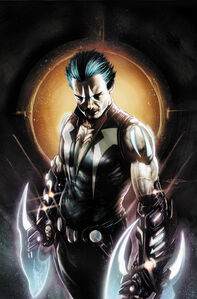 The New 52 version of Lobo. 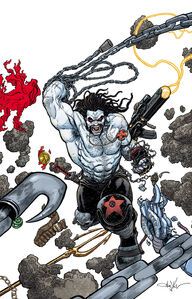