-Save Anew and Reconcile their relationship (Failed because she killed by Setsuna, but success because they finally reconcile)
-Kill Ali al-Saachez (Success)
-Save the humanity and change the future

All Celestial Being member, All Katharon member, Orange-Haro, Anew Returner

Lyle Dylandy (ライル・ディランディ Rairu Dirandi?) is the one of main character and protagonist on Mobile Suit Gundam 00, as well as he is a Gundam Meister . After the death of his twin brother, Neil Dylandy , he become the successor of his twin as Gundam Meister, with hold his codename as Lockon Stratos (ロックオン・ストラトス Rokkuon Sutoratosu?) and also the only survival member of Dylandy Family.

Like his brother, Lyle voice by Shin-Ichiro Miki and Alex Zahara on english version.

Just like his late twins, Lyle also laid-back , care-free and straight forward . Lyle's also the sort of person who always let his intentions known when he talks. Like his brother, he also has a strong sense of justice, and is strongly motivated to make a difference to the world his own way. However, despite he share huge similarity with him from their look and their persona, Lyle greatest dislike being compared by Neil.

Both the twins always being compared on their childhood-time, due Neil always depicted as the more gifted among the two, which the result Lyle chose to runaway and stay on dormitory in order to avoid the compared from Neil. Lyle depicted as cold-man , and can be harsh than Neil , If someone mistakes him for his older brother, he’s quick to react and, at times, capable of doing drastic things to differentiate himself. However, Lyle still have respect toward to Neil,For example when Neil was still alive and was still sending money to him, Lyle spent his money carefully in respect to his older brother who always looked out for his sake.

Lyle at the first time doesn't hold a revenge toward the terrorist, in contrast to his brother, Lyle decided to move on with his life after the tragedy.He know that the tragedy cannot be change and better he face about his future than thinking or imprisoned about his past .However, after his girlfriend , Anew Returner killed by his fellow meister, Lyle begin to understand about Neil’s hatred to Ali al-saachez and about his pain who see at their love-one getting killed , which led him to engaged a battle with Ali al-saachez and success killing him, indicate that Lyle success fulfill his brother wish for revenge their family death. He decide to leave katharon after the defeat of A-Laws and Innovator and continue become Gundam Meister for future,Neil and Anew sake.

While he does excel in shooting, he was only second to the previous Lockon in sniping, scoring lower marks in accuracy than Neil, which he got scoring 78% while Neil was 90%. Lyle more fit on close-combat even sometime he use a pistols on a battle, unlike Neil who favor shooting and sniping from far.And also as Katharon agent, he also known about spy ,infiltration tactics and disguise

Before become meister and join katharon, Lyle confirmed work as employee of a top trading company after he finished his studied.On PS2 Game " Mobile Suit Gundam 00: Gundam Meisters", he briefly shown again on cemetery. He look at Tieria Erde . who visit Dylandy's Family grave to mourn Neil Dylandy death. From behind the tree, he probably wondering why there is the other people who visit their family grave instead Neil. Considering he doesn't know about Neil's death when he become Gundam Meister, before Setsuna told to him 4 years laters.

Between 4 years later, he join katharon because he unable to keep a blind eye from these horrible atrocities by ESF and A-Laws, and become the most important assets due he can become reliable informant and MS-Pilot, under his codename "Jean 1"

Setsuna meet him on some place at Ireland, which he tell to him about Neil death and his recruitment to join Celestial being as Gundam Meister .He then called and asked to meet with Katharon higher-ups to discuss his recent contact with Celestial Being. When he first time join CB, many crew surprised to see him and mistaking him as Neil Dylandy, however Lyle just casually respond to them that he not Neil. With Lyle now join CB as Lockon Stratos, Celestial Being and Katharon make a alliance between them for against A-Laws and ESF.

4 month CB Hiatus after Break pillar incident, Lyle begin have romantic relationship with Anew Returner , who unknown by him was Innovator secret agent. When CB success capture Revive Revival (which his captured already part Innovator plan for release Anew ), Revive introduce himself and use his quantum-brainwaves to release Anew true-persona. He try to make her to return to his side without harm her, but failed. When she return to help her fellow Innovator for capture 00, Lyle decide to engage a battle with her, nearly almost success to make her return to his side, she begin hijack by Ribbons Almark, and brutally attack him and almost killing him. When she about being killed by Setsuna when he shoot her, Lyle and Anew later reconcile their relationship before her death. After her death, Lyle furiously punched Setsuna, and broke down in tears on his chest, and apologize Setsuna Failure.

Near the end of season 2, he finally engage a battle with Ali al-Saachez, who already kill his family and also Neil. When Tieria diable Ali's Arche, he smile at him and begin to shoot his machine. However, he found Ali is runaway, and he chase him. When he found him, Lyle releasing his gun and raising both his hands. As Lockon pointed the gun at Ali, he reflected on how the same man took away his family. He was about to shoot when Anew's words of mutual understanding suddenly came to his mind and convinced him to drop his gun. See the chance for kill him, Lyle quickly grab his gun and shoot Ali until death. After he success kill Ali, he and Allelujah help Setsuna to fight against remains of Innovator member. Lyle engage battle with Revive . Even Revive success make him injured, Lyle on his final chance active Cherudim Trans-Am , Destroy Revive's Gadessa, killing Revive instantly. He then remembered Anew, before finally succumbing to unconsciousness. He show treat by Linda Vasthi to treat his Injured.After he healed, he shown visit his family grave and Anew Grave ,he told to them he decide to choose his life continue as Gundam Meister and permanently leave Katharon. 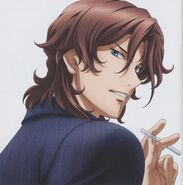 Retrieved from "https://hero.fandom.com/wiki/Lockon_Stratos_(Lyle_Dylandy)?oldid=1695064"
Community content is available under CC-BY-SA unless otherwise noted.