Lodestar is the Omnitrix's DNA sample of a Biosovortian from an unknown planet.

Lodestar has a black body with long shoulders with yellow on top ease one, yellow claws that look similar to crabs, yellow feet with two toes on ease foot, and has a magnetic floating metal head with green eyes and a mouth thay rarely move. The front of his chest is yellow and has the Omnitrix symbol on it. 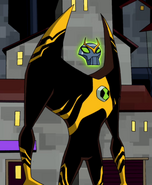