Prevent a war with the People of the Land.

Log Horizon is the titular guild of the light novel and anime series Log Horizon, and the one which all of the main protagonists belong to. It was formed after the Apocalypse by the main protagonist Shiroe, who subsequently became its Guild Master. It is also the organizer of the Round Table Alliance and one of the alliance's 11 member guilds.

When Elder Tales was just a game, Shiroe had long avoided being in a guild, having turned down numerous invitations and offers. The closest thing to a guild he had been in before was the Debauchery Tea Party, which wasn't a guild so much as it was a group of Adventurers that frequently explored together. However, after he along with countless other players were pulled into the game by a mysterious phenomenon referred to as the Apocalypse, Shiroe decided that forming a guild was the best course of action. Thus, Shiroe, Akatsuki, Naotsugu and Nyanta became the founding members of Log Horizon, with the former acting as Guild Master. Exactly where the name 'Log Horizon' comes from remains a mystery.

Despite being the smallest guild shown in the series (at only 9 members at the current point of the series), it is a very powerful and formidable guild due to the great strength of its members, with all of the founding members being at Lv. 90 and three of them being members of the infamous Debauchery Tea Party: Shiroe, Naotsugu and Nyanta. Even the junior member are very skilled for someone at their levels. Their true strength lies in their ability to work together, which has always been a crucial part of Elder Tales. 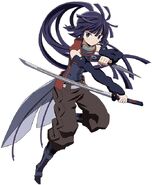