NOTE: This article is about the incarnation of Lois Lane from the DC Extended Universe. The mainstream version can be found here: Lois Lane (DC).

Ms. Lane
My World (by Superman)
The Big Gun

Ally of the Justice League

Being with Clark Kent.

Writing in her Notebook.
Reporting at the Daily Planet.

Aid Superman and the military to stop Zod.

Lois Lane is a recurring character in the DC Extended Universe, appearing as the deuteragonist of Man Of Steel, the tritagonist of Batman v Superman: Dawn Of Justice, and a supporting character in Justice League and Zack Snyder's cut.

She is a Pulitzer Prize-winning reporter for the Daily Planet newspaper, and the older sister of Lucy Lane. She is most famous for her publishing's on the alien hero Kal-El, who later became known as "Superman", whom she had also developed romantic feelings for him in the process. She would become a pivotal in acting as the voice for reason for Superman, and later helped the Justice League when they needed Clark to regain his memories to stop Steppenwolf.

She is portrayed by Amy Adams, who also played Princess Giselle in Disney's Enchanted, Amelia Earhart in Night at the Museum: Battle of the Smithsonian, and Mary in The Muppets. In the Japanese dub, she was voiced by Chie Nakamura, who also voiced Sakura Haruno in Naruto and Sophitia Alexandra in Soulcalibur VI.

Lois Lane was born in 1974, and would become a reporter for the Daily Planet in Metropolis, Delaware. She would become one of their top reporters, earning herself a Pulitzer Prize before the events of Man of Steel.

Lois was sent by her editor, Perry White, to cover the story of the US Military's secret activities on Ellesmere Island in Canada. Arriving and having her bags carried by Clark Kent who was temporarily working for Arctic Cargo, she was not greeted well by the military who try to keep their reasons for being there a secret. Lois gets them to show her what they have found and at night she sneaks out to take pictures and notices Clark sneaking around. Following him down a long straight tunnel in the mountain, she finds an extraterrestrial ship buried under the ice. In awe, Lois enters to see a floating robot which, when she tries to take a picture of it, attacks her with a mechanical whip, sending Lois flying 20 feet and severely wounding her. Clark, hearing her and comes to Lois's rescue, cruising the robot with his bare hands, before cauterizing her wound with his Heat Vision, making her bellow in pain. The mysterious man then leaves an unconscious Lois in a safe place, before piloting the huge ship away.

Returning to Metropolis and the Daily Planet to write up her story on the immensely powerful mystery man and the alien ship rising from under the ice, her story is rejected by Perry for being too unbelievable and possibly inspired from Lois hallucinating. Undeterred and realizing that this story needs to be told, Lois promptly leaks her story to Glen Woodburn, an internet blogger. Shortly thereafter, Lois begins to investigate the super-powered being by tracing back his recent saves and past jobs, trying to get information on him. She goes to the Canadian highway bar he worked at, and also gets in touch with the crab boat fisherman he used to work with. Lois eventually gets his name "Clark Kent", and tracks him down to Smallville, Kansas where she meets with a source: Pete Ross, who was a classmate of Clark's at school.

Pete tells her about Clark saving both him and the school bus with his incredible powers twenty years ago. Lois arrives at the Kent Farm and is greeted by Martha Kent, who isn't pleased to see a reporter, and sends her away. Lois then promptly goes to the local cemetery, where Clark's adopted father is buried, when Clark arrives and tells her the story of how Jonathan Kent had died sixteen years ago, protecting Clark's secret, believing the world wasn't yet ready, which is why he still hides his abilities, leaving Lois understandable and pensive. After returning to Metropolis, Lois is determined to drop the story and is called into Perry's office after the blogger posts it all over the Internet. Perry tells Lois that the publishers wish to sue her, and that she is given 2 weeks leave without pay as a result, to which she promptly agrees. A worldwide message sent to every electronic device on the planet sent by General Zod confirms the existence of Alien life. When the blogger she leaked her original story to goes on a talk show, the FBI arrive at her apartment and take her to Peterson Air Force Base.

Kal-El arrives at the base preparing to surrender himself if Lois was freed. Lois was put in a room with Kal-El asking why he let them handcuff him, he replies so that it makes them feel in control before asking what the S on his chest stood for, suggesting the name Superman before being cut off. After a meeting is arranged for the handing over of Kal-El where Zod's second in command Faora-Ul arrives to pick him up, she also requests that Lois come along whom Clark slips his Command Key too. Aboard, Faora puts a visor on Lois so that she can withstand the atmosphere on the ship taken to Black Zero, Zod's flagship. Lois is put into a holding cell while Clark is taken by Zod's men and strapped down and subjected to mental probing. Lois finds a port for the Command Key and inserts it revealing a projection of Jor-El who is able to control Black Zero and change the atmopshere to allow Clark's powers to return before Jor-El informs Lois of how to destroy Zod's ship. Jor-El then guides Lois through the ship avoiding capture and into the safety of an escape pod. She launches the pod and rockets to Earth with no controls.

Clark who had escaped flies after her and pulls her from the pod right before it hits the ground. He lands them gently and have a tender moment before he hears Zod threatening his mother and he zooms off leaving her in a cornfield. After Clark and the military battle Zod and his forces in downtown Smallville forcing them back to their ship, Lois reveals the plan Jor-El told her. Along with Col. Hardy they put Kal-El's Spaceship in a C-17 and head for Metropolis where Zod had launched his Black Zero ship upon the city. On their way to use the Phantom Drive from the ship against Black Zero, Faora jumps on board and dispatches the crew before throwing Lois out of the plane as well. As she begins falling to the ground, Clark arrives and captures her as Hardy flies the plane directly into Black Zero creating a singularity as Jor-El told her which sucked everything inwards.

Clark managed to fly away from it and land Lois next to Perry, Steve Lombard and Jenny where she on impulse kissed him which he returned. Zod emerges from the wreckage of Metropolis and attacks Clark. Lois, Perry, Lombard and Jenny make their way across the wreckage of Metropolis as Superman battles Zod as debris from space falls into Metropolis. Lois follows it and saw the two crash land in Metropolis Central Station. Arriving inside, she found Clark in emotional agony at having snapped Zod's neck killing him to stop his madness. Lois ran over and consoled a troubled Clark. After the Battle of Metropolis, Lois goes back to work at the Daily Planet when Clark arrives on his first day wearing glasses to hide his identity as the alien hero that was dubbed 'Superman' where Lois, who instantly recognized him regardless, greets him.

Batman vs Superman: Dawn of Justice

In 2015, Lois traveled to Nairomi, Africa to get a story on the Nairomian Civil War, and was accompanied by Jimmy Olsen to speak with warlord Amajagh. During the interview, Lois was taken hostage by Amajagh after Jimmy revealed that he was a CIA agent, and was murdered after he revealed that Lane didn't know of this. She was saved by Clark, and recovers a bullet and does further research to find that the bullet has no manufacture name on it. After the incident, Lois continued to do her research on the bullet, and collaborated with Janet Klyburn, who informed her that the bullet was made from an unknown metal element. She then met with Swanwick, who then told her that the bullet was made by LexCorp Industries, but Lois was told not to make a report to expose the company by her boss since Lex Luthor would sue the Daily Planet.

Lois was present at U.S. capitol when it was unknowingly bombed by Luthor, who had Superman be blamed for failing to save the senators in the building. She was able to deduce that Superman couldn't had seen the bomb when Klyburn phoned her that Wallace Keefe's wheelchair was made of lead, which Clark can't see through. Lois attempts to tell Clark this when he returns to her apartment, but he decides to go in exile due to feeling guilty of what happened at the capitol. She then continued to find more evidence of Luthor's involvement, such as learning that Keefe didn't know he was going to die since had just bought groceries at his apartment, but Lane was kidnapped by Lex since he knew she was behind his trail. Lex pushed Lois off the side of a building to have Superman arrive, and then forced the man of steel to fight Batman if he wanted his adoptive mother to be not harmed.

After being saved by Clark, Lois returned to the Daily Planet and told Perry to get her a helicopter to travel to Gotham City, where she managed to stop Batman from killing Kent with a Kryptonian spear. Lois then witnessed Clark, Batman and Wonder Woman battle Doomsday, and later mourned his death after he sacrificed himself to kill the creature. She attended his funeral with Martha, where she poured dirt on his casket before leaving.

After the death of Clark, Lois still grieved for his death and became withdrawn, deciding to not work at the Daily Planet. She would become pivotal in brining back Superman's memories when Batman decided to have her come to prevent the man of steel from murdering him and the Justice League.

In the Knightmare future, Lois was killed by Darkseid, causing Superman to join Darkseid's regime due to mind control from the Anti-Life Equation. As a result, Superman killed the Justice League and later the Insurgency, a group led by Batman that battled against Darkseid, Superman, and the Regime.

Lois is mentioned in Shazam!, being a reporter that came into contact with Freddy Freeman, who wanted to have Billy Batson's heroics as Shazam published to the Daily Planet.

Lois is a resolute, tough, and persistent reporter who always seeks the ultimate scoop and story. When putting aside her job description, however, Lois is shown to be a compassionate and fair and after her first meeting with Kal-El, smitten with the selfless heroics as well as the childhood pain he had endured all his life and decided to drop what could have been the biggest story in human history for him. 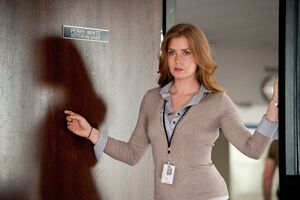 Lois in Man of Steel. 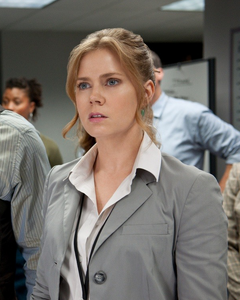 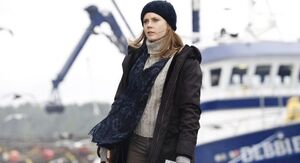 Lois and Kal-El before kissing. 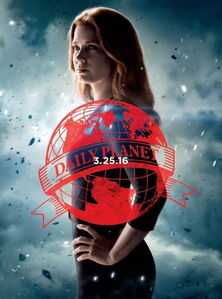 Lois in the bathtub.

Lois being tormented by Lex Luthor. 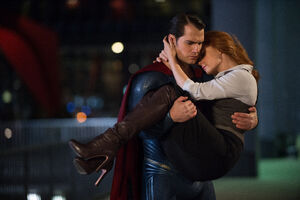 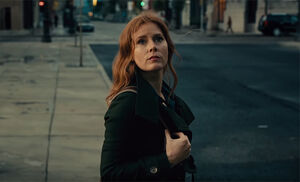 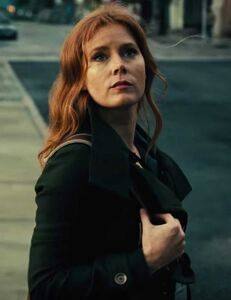 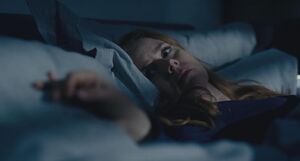 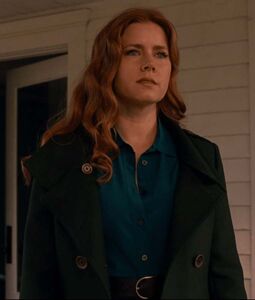 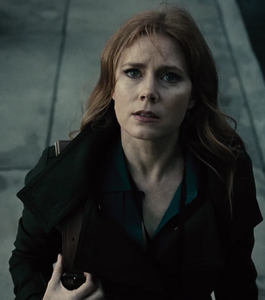